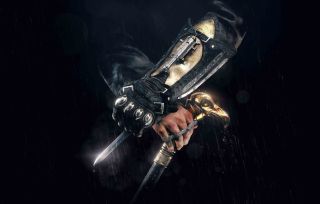 Word slipped out late last year that the next Assassin's Creed game will be called Victory, and will take place in Victorian-era London. None of which has actually been confirmed yet, as far as I know, but next week Ubisoft will make it official.

The teaser for next week's reveal doesn't actually refer to it as AC: Victory, but between the cane and the tiny, wrist-mounted cannon, it's pretty clear what's coming.

The "world premiere of the next installment of Assassin's Creed" will be unveiled via livestream at 9 am PT/12 pm ET on May 12. While you wait, be sure to have a look at what the PC Gamer UK team thinks should (and shouldn't) be in the game: Mutton chops yes, but Dick Van Dyke, no. Definitely not.