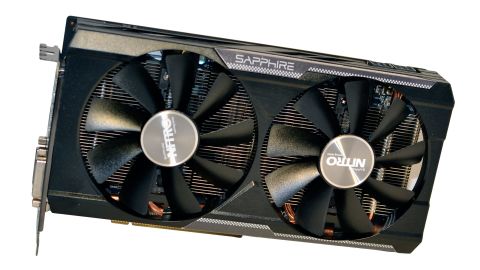 The fastest graphics card you can find for under $250, but not substantially different from other options.

Let’s do the Time Warp again

Flashback: The date is December 11, 2011, and AMD has just launched their latest and greatest graphics processor, the HD 7970, aka Tahiti. It delivered awesome performance and was the pinnacle of 28nm GPUs at the time, besting Nvidia’s then-best GTX 580 by a decent margin of 15-20 percent. That might seem like ages ago in the world of computer graphics, but it was an important milestone for AMD, and the HD 7970 remains with us even now—with a few tweaks to clock speeds and such—as the R9 280X.

Flashback #2: This one is more recent, dating back to just over a year ago on September 10, 2014, when AMD released their first-ever GCN1.2 (the unofficial designation) graphics chip, Tonga. Tonga was initially launched as the R9 285, generally available with 2GB GDDR5, though 4GB models now exist. Tonga undoubtedly contained new architectural enhancements, chief of which was the use of lossless delta color compression. This allowed AMD to cut the memory bus down from 384-bit to 256-bit without a major loss of performance, though it also reduced the standard configuration from 3GB to 2GB VRAM. Other architectural enhancements included improved tessellation performance, an optimized instruction set, a new video scaler, and an improved multimedia engine (UVD 5.0).

The net result of the changes is that Tonga is a less expensive graphics card to manufacture compared to Tahiti, and it offers similar overall performance—the GPU itself is roughly the same size, despite having an additional 700 million transistors. The catch with the earlier launch of Tonga in the form of the R9 285 is that it featured the same 1792 graphics cores as R9 280 (aka HD 7950), with a couple functional units disabled. The rumored R9 285X never happened, but one year later we’re now getting the fully enabled release of Tonga with the R9 380X, complete with 2048 graphics cores. Here’s a quick look at specs for the major Tonga and Tahiti GPUs:

Note that we’re not including the HD 7970/7950 in the above table, which had slightly lower clocks than the R9 280X/280 along with substantially higher launch prices ($549/$449). The pricing reflected their positioning as the at-the-time fastest GPUs; when they were refreshed as the 280X/280, they were repositioned as mainstream offerings, the top-tier R9 290X/290 having displaced them. Needless to say, the drop in prices has certainly been appreciated, though it hasn’t helped AMD’s bottom line.

Checking out the specs, the key takeaway is that the R9 380X is fundamentally the same as the R9 380, only with more cores enabled. It has the same (official, at least) clock speeds for the GPU core and GDDR5 memory, so the only advantage is having 14 percent more cores. That means at best, 14 percent better performance, and in many cases it will fall short of that mark. The MSRP for the standard card reflects these facts, with a price only 15 percent higher than the R9 380. AMD notes that add-in board partners may charge slightly more for custom coolers, which is the case for our review sample, a Sapphire R9 380X Nitro.

The Sapphire R9 380X Nitro isn’t a stock card, naturally. Along with the custom cooler, the core and memory are overclocked. The GPU runs at 1040MHz from the factory, a mild seven percent overclock. The GDDR5 also gets a moderate bump, running at 6000 GT/s, a five percent overclock. Our R9 380 sample is likewise a Sapphire Nitro card, this time without a backplate, and it runs at 983/5800MHz, so as far as clock speeds go the 380X has a five percent advantage.

Our test bed is the same as usual, now upgraded to Windows 10. We have not yet retested all of the GPUs with new drivers on the new OS, though prior testing suggests things won’t change much. We’re using custom AMD drivers for the R9 380X, based off the Catalyst 15.11 Beta tree. The Radeon Software Crimson Edition drivers are as yet unavailable, though we’re certainly eager to see what they do for performance. For our testing here, we’re highlighting the R9 380X and the R9 380, but keep an eye on the similarly priced GTX 960—and for added fun, tack on a few years and check out the HD 7970 performance.

Take Me Back in Time

Doc and Marty might be feeling like this time traveling business is a bit of a rip off. Nearly four years later and this mainstream part sporting a new architecture barely outpaces the HD 7970. On the surface, that might not seem very impressive, but there’s a reason AMD positions the 380X as an upgrade path for owners of the HD 7850. When the 7970 launched 2011, it was a monster card, but it carried an equally monstrous price tag. Now you can get nearly the same performance, using less power, for less than half the price. Or put another way, the R9 380X costs a bit less than the original $250 asking price of the 7850, and it should be about twice as fast. Something else to note is that our old 7970 with a blower fan gets extremely loud, which is something we didn’t experience with the 380X, and power use is a healthy 50W or more lower.

Overall, the R9 380X outperforms the R9 380 by eight percent, though drivers seem to be a bit iffy in a couple of tests; it’s basically right in line with the 15 percent price increase. Meanwhile, Nvidia’s chief competition for the R9 380X comes in the form of the GTX 960, which is available in either 2GB or 4GB variants. The 2GB model is what we have for testing, and there are certainly games where the limited VRAM is a factor. Considering the 2GB cards are priced closer to the 380, while the 4GB cards are priced roughly equal to the 380X MSRP, drawing a final conclusion is difficult. (Look at the 2GB R9 285 vs. the 4GB R9 380 for an example of what the additional VRAM can do.)

What we can say is that 380X wins the battle at 1080p Ultra and 1440p Ultra by nearly 20 percent against the 2GB card. The gap at 4K is even larger, but it’s not really a target resolution for either GPU. Sure, AMD’s 380X consumes about 50W more power under load, but over the course of a year of very heavy use (eight hours per day, seven days a week), that 50W difference amounts to $15-$30 (depending on your price for electricity, naturally), and you’re still getting better performance.

Looking at the big picture, the R9 380X is a good GPU that’s able to handle 1080p gaming at maxed out settings in most titles, and when it falls short (e.g., GTAV and The Witcher 3) it’s usually not too difficult to drop to high quality or disable anti-aliasing to get back to playable frame rates. It will even do 1440p at High settings in most titles without struggling too much, though you’ll probably want to pair it with a FreeSync panel in that case as sub-60 FPS will be more of a problem. The 380X is where GPUs start becoming truly potent, but without the higher price tags—it’s half the price of the R9 390X and 66 percent of the performance, which is a fair compromise. Moore’s Law has many facets, and while the focus is often on increasing performance and transistor counts, reducing price and power requirements is equally acceptable. Of course we’re far off the pace of Moore’s original observation, since it took four years to cut the price in half, but it’s better than standing still.

AMD sent us the Sapphire R9 380X Nitro for this review, but the R9 380X will be available from a variety of other partners. Looking at the above designs, all of them are open air coolers with dual fans, so barring any serious missteps they should all work well. Pricing and factory overclocks will be important, as will manufacturer warranties, so keep your eyes peeled for any good deals.

Where do we go from here? Having time traveled back to the launch of the HD 7970 four years ago, it’s only fitting to wrap things up by looking forward. We know 14/16nm FinFET process technology is coming online, and the first GPUs using the smaller manufacturing node should arrive next year. R9 380X in that sense is one of the last “new” GPUs we’re likely to see before the switch, and it doesn’t do a whole lot to shake up the market. Considering R9 380 is only 5-10 percent slower and has been around for several months now, it’s difficult to imagine many people have been waiting for R9 380X. If you happen to be building a new PC and are in the market for a $200-$250 graphics card, the R9 380 and 380X have that market locked up for now.

Our next stop will be 2016, and we expect things will get far more interesting—maybe not hoverboard and flying car interesting, but close. It took several years for performance at the $200-$250 price point to double, but we might just see the next doubling in the coming year.

The fastest graphics card you can find for under $250, but not substantially different from other options.