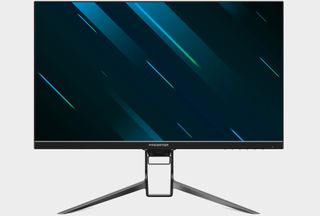 Acer is getting ready to launch of trio of Predator gaming monitors, the smallest of which sports a 32-inch display—which also happens to be the most expensive of the bunch. It will be available in the second quarter of this year for $3,599 in the US, and €3,299 in Europe.

What could possibly justify more than three and a half large on a gaming monitor? I'd like it to be attached to a robotic butler that can clean my home and take care of the pets when I'm out of town, but unfortunately it's not. Instead, this is a relatively new breed of G-Sync Ultimate displays.

G-Sync is the marketing name for Nvidia's game-smoothing technology, which matches a monitor's refresh rate to the GPU to eliminate screen tearing that can occur when they are not in sync. Initially, there was just G-Sync, which consisted of a special hardware module inside the monitor.

More recently, Nvidia has added two additional categories of G-Sync, including G-Sync Compatible and G-Sync Ultimate. The former is a certification given to adaptive sync/FreeSync displays that pass Nvidia's own testing, and the latter is an expansion of the hardware-based G-Sync implementation, reserved for monitors that meet certain criteria, such as HDR support and over 1,000 nits brightness.

In this case, the Predator X32 can ramp to 1,440 nits. That is incredibly bright, and beyond the 1,000 nits measurement where HDR content truly shines on LED-backlit panels. It's also DisplayHDR 1400 certified.

The Predator X32 is built around a 10-bit IPS display with a 4K resolution (3840x2160) and fast 144Hz rate. It uses mini LEDs to light up the screen, and offers 1,152 zones of local dimming to brighten and darken specific areas of the display.

Presumably, none of this comes at expense of color accuracy. It boasts 99 percent coverage of the sRGB color space, so it should be capable of bright, vibrant, and accurate color reproduction. Only eyes-on testing will reveal if that's actually the case, but on paper, this is a beastly display and in contention as one of the best gaming monitors.

Acer also revealed the Predator X38 for gamers who want a bigger display with a curve. Specifically, the 37.5-inch panel on the Predator X38 has a 2300R curvature, and offers a 3840x1600 resolution (UWQHD+) with an even faster 175Hs refresh rate (by way of an overclock) and 1ms response time.

This one is DisplayHDR 400 certified, so it is far less bright than the Predator X32. It also offers a high color gamut, with Acer claiming 98 percent of the DCI-P3 color space (DCI-P3 has a wider color gamut than sRGB).

The Predator X38 is considerably less expensive than the decked out Predator X38, though it's not cheap by any means. It will be available in April for $2,399 in the US and €2,199 in Europe.

Finally, Acer unveiled a larger 55-inch gaming monitor, the Predator CG552K. It's not quite on the level as the spattering of 65-inch BFGD (big format gaming display) monitors, but is still quite big.

This one features an OLED panel with a 4K resolution, 400 nits brightness, and 98.5 percent coverage of the DCI-P3 color space. It doesn't have a dedicated G-Sync module, but it is an adaptive sync display and is G-Sync Compatible, Acer says.

Other specifications include a 0.5ms response time (gray to gray) and 120Hz refresh rate (via overdrive).