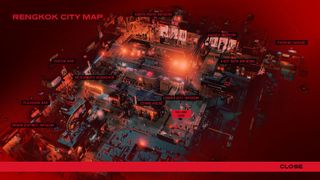 Ruiner thrusts me into the shoes of a masked killer with one objective: KILL BOSS. There's no fanfare, just a cacophony of thumping electronica and brutal kills. As I cleave through enemy after enemy and peel away the layers of what I think I know, one thing becomes clear—someone is definitely being played. Is it me?

Developed by Polish team Reikon Games (ex-Witcher and Dying Light devs) and published by Devolver Digital, Ruiner is top-down and faux-isometric, and so will immediately draw comparisons to games like Hotline Miami or Hyper Light Drifter. But there's more to it than that. It's set in a futuristic city inspired by Bangkok that's absolutely drenched in the cyberpunk aesthetic, and it explores topics even more disturbing than the kills you'll engage in.

The lead character is decidedly robotic, but there’s a soul beneath the helmet and a reason for the madness. The nameless player character’s brother has been kidnapped by Heaven, a menacing megacorp that's taken on virtual reality in a sinister way. There's also a hacker known only as “Her” with whom you share a goal, a story that will unfold throughout the rest of Ruiner.

So far it’s a darkly comedic, action-packed story. Ruiner opens up crimson-soaked industrial corridors as it eases me into combat, at first armed only with a melee weapon. From there, I face off against baddies wielding everything from melee weapons to SMGs to tricked-out shotguns, which can be taken and used against them.

Using the keyboard to control movement and the mouse to aim in a way reminiscent of Alien Breed, I run across platforms, dodge mines, and exterminate everything that stands in my way.

Combat is by far the most satisfying aspect of Ruiner, a veritable ballet of bullets and projectiles whizzing past as I mow through each wave of bad guys. Zipping around the screen feels natural and satisfying, especially when time slows down for some brief moments of bullet time. It's a smooth, unflinching system. Miscalcuate once and it's curtains, over and over again.

Luckily, there are special abilities to keep me from dying too often, like the Energy Shield. Triggered by the space bar, it's a portable field of energy that can block projectiles like bullets and is toggled on and off. It’s an absolute boon for charging through areas where turrets pepper me with projectiles.

I can also use a quick dash ability either as a one-off sidestep, or to set targets while my character moves between them automatically. Used in tandem, these abilities kept me out of the line of fire. The challenge lies in learning to string them together, which can be a little unintuitive at first.

As I play I acquire skill points to spend on newer abilities and upgrades that’ll help keep me alive longer, like a pulse of energy that can be used to stave off enemies. These actions can be swapped in and out via the radial menu in the wild. If I make a mistake while spending skill points on new abilities in the future, I can deactivate any previously unlocked ability or upgrade and change them out for new ones. So that's nice.

The very first brush with a small-fry security chief boss is difficult enough even while pirouetting with an LMG, dodging and weaving bullets, but a later encounter with a bigger boss is even more of a thrill ride. I take out baddies right and left and siphon their health and energy drops as if they were krill to a whale, keeping myself alive and upping the timer. It's a frenetic, blood-soaked party, with one hell of a hangover.

One half of Ruiner is this perfectly tuned combat. The other half slows things down a bit for small hubs in the city where I can chat with citizens, purchase items, and get into trouble. There’s a form of currency called "Karma," gamified citizenship points for city-dwellers awarded for completing various actions.

Some locations require a high level of Karma to interact with, such as a club in the first area of the game, South Rengkok. There's room for the rest of Ruiner to deal with social commentary. If you come for the combat, you’ll definitely want to stay for the interactions, dialogue options, and colorful cast beyond the immediate lead characters.

The prologue and opening level show Ruiner to be a twitch action game stitched together with satisfying hub areas that exude style. There are plenty of secrets hidden within Rengkok, a mystery to solve, and plenty of hacker slang to pick up along the way. It’s going to be a wild ride.

Come back to PC Gamer Indie next week for our full review of Ruiner.