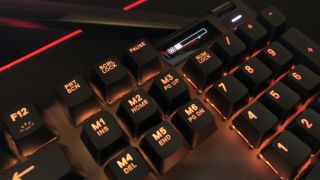 Sadly, not even the best gaming keyboards are all-encompassing. For fast-paced shooters and action games, we recommend switches with a lower actuation point, that is, the measured distance at which your keypress is registered. The most well-known key switch manufacturer is Cherry, and its 'MX Speed' switches have the lowest actuation point in its lineup.

But slower paced strategy games require more intent. You can't go around pressing keys haphazardly in Dota 2. You will lose. For games like these, you're better off employing a Cherry MX Blue- or Brown-equipped keyboard. No keyboard suits every genre, and most people don't only use their computers to play games. One of the beauties of the PC is that it's versatile, as practical for work as it is play. That's where the SteelSeries Apex Pro comes in.

Unlike most mechanical boards, magnetic sensors comprise its proprietary Omnipoint switches, developed in conjunction with freshman enthusiast key switch maker Gateron. As such, the Apex Pro doesn't fall prey to some of the glaring issues plaguing traditional mechanical keyboards. Ranging from 0.4mm to 3.6mm, its actuation point can be adjusted. Its lifespan, according to SteelSeries CTO Tino Soelberg, is "at least 100 million keystrokes" — double that of the average mechanical switch.

Taking cues from the SteelSeries Rival 700 and 710 before it, in the upper right-hand corner of the Apex Pro is what SteelSeries calls its OLED Smart Display. Why put an OLED screen on a keyboard, you ask? The better question is, why not? Similar to the Touch Bar on Apple's high-end MacBook Pro configurations, the Smart Display can show you notifications from apps running in the background.

Support for Discord, Spotify, CS: GO and Dota 2 has already been confirmed. However, in the future we could see more useful applications added to the mix. In my hands-on demonstration at Computex 2019, one SteelSeries rep suggested an FPS counter, you know, for monitoring frame rate values and using them to better optimize graphics settings. As someone who frequently takes screenshots while obsessing over performance, this feature is a would-be killer app.

Until something like that comes to fruition (a possibility considering it takes cloud updates over SteelSeries Engine 3), the Apex Pro's biggest value proposition is its variable actuation. A demo mode lets you set your actuation by way of a clickable scroll wheel to the right of the Smart Display. In it, hitting the actuation point results in a sudden animated RGB burst sequence. That way, you know exactly how hard you have to press down in order to register a "click."

Not to be outdone by SteelSeries' previous attempts at memery, the Smart Display also has a few less meaningful — but still fun as hell — tricks up its sleeve. Exhibit A: I was able to screenshot, upload and trot out our own logo in a matter of seconds using the SteelSeries Engine 3 software. Look at that baby glow. In another instance, a SteelSeries rep put a Confused Nick Young gif on display. We all had our laughs, and then we moved on.

Much like every other premium gaming keyboard on the market, the scroll wheel doubles as a volume knob. It doesn't have conventional media keys, but the SteelSeries Apex Pro is by no means a conventional keyboard. Its onboard media controls are instead tied to the onscreen Smart Display interface. Some combination of these buttons will come in handy for changing all of its settings on the fly.

An ARM processor powers the OLED Smart Display, one that Soelberg said is capable enough to run the original 1996 version of Quake. Because it has a fair amount of RAM built-in, you can store up to five profiles on the keyboard itself. So while it is compatible with SteelSeries Engine 3, installing the software on your PC isn't mandatory, though it does come recommended by the manufacturer. For those hoping to take advantage of its per-key RGB lighting functionality, without ever having to download a third-party app, the SteelSeries Apex Pro has your back.

Typing and playing games using the Omnipoint switches ought to feel satisfying out of the box. Though I've had minimal experience doing it myself, I did get a short amount of hands-on time at SteelSeries' Computex suite in Taipei last week. Bespoke actuation aside, the palpable bump on the Apex Pro was subtle, more reminiscent of a keyboard donning Cherry MX Reds than MX Blues. If you normally like linear key switches, you'll like these too. If not, you probably won't. Simple as that.

More striking to me was the magnetic wrist rest. Made entirely out of silicone, one rep told me that after several weeks of consecutive use, his accessory never saw a mark. I find this hard to believe given the susceptibility of leatherette wrist rests to natural skin oils and grease. But maybe SteelSeries is onto something with this all-silicone wrist rest idea. At $199.99, or $179.99 for the tenkeyless version, the company did tell me it contributed to the Apex Pro's luxury price point. Yet, from my perspective, that does seem like a worthy concession.

Other features of the SteelSeries Apex Pro include backlit USB passthrough and three-way cable routing. Before it releases on June 11, exclusively at Best Buy and the SteelSeries website, check back to PC Gamer for a full-length review.