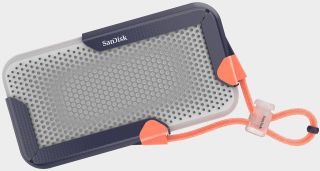 I'd totally jam 8TB of portable SSD storage into my pants pocket if (A) such a drive existed and (B) it was reasonably priced. Point B will be addressed at later date, because SanDisk, a division of Western Digital, has taken care of point A. Well, sort of.

SanDisk did actually build what it claims is the world's first 8TB portable SSD (I can't find anything out there to disprove the claim) and has been showing it off at CES this week. However, it's just a prototype at the moment.

There's every reason to believe this will become an actual shipping product at some point. Unlike some prototypes, this is not some whimsical new bit of tech. It's a capacious SSD stuffed into a durable-looking, pocket-sized enclosure with a mini lanyard. But then there's point B.

Pricing will dictate if this is a feasible product for the masses in the near future. Collectively, we're very fond of Samsung's T5 SSD, which tops our list of the best external hard drives (and might be supplanted by the recently announced T7 Touch). And that gives us a good frame of reference—the largest capacity is 2TB, and it sells for $350.

SanDisk also offers a portable SSD in a similar looking enclosure. It tops out at 2TB as well, and costs $270 on Amazon (and has an unrealistic $500 list price). At four times the capacity, the 8TB prototype could conceivably carry a price tag above $1,000.

That's where I would lose interest, and I doubt I'm alone. The good news for SanDisk (and Western Digital) is that SSD prices have come down a lot over the past several years. The bad news is there are market indicators of a pending spike due to NAND flash memory costs. If that comes to pass, it would be more reason to delay turning the prototype drive into a retail product.

SSDs are of course inherently faster than HDDs. The bottleneck on these kinds of devices is the interface, and in this case, the prototype takes advantage of the latest USB 3.2 Gen 2x2 specification (20Gbps). Looking strictly at the interface, the theoretical maximum bandwidth available is 2,500MB/s.

SanDisk isn't providing any benchmarks or details about the SSD inside. I can confidentially say it won't offer 2,500MB/s transfers, because if nothing else, overhead will make that impossible. But there is the potentially for this to be not only the most capacious portable SSD on the market, but one of the fastest as well.