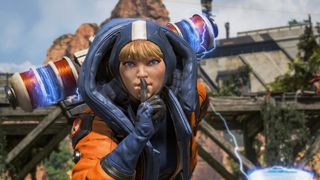 The Apex Legends Season 2 launch trailer will be revealed tomorrow, June 27, at 10 am PT/1 pm ET, on YouTube. There's a page for it up already, if you'd like to wait. (And based on the very active chat, people are.) But other interesting things are already happening.

First up is this tweet, which features the dragons that appeared in the game last week—except that maybe they're not dragons so much as little bitty birdies, at least compared to whatever it is that appears in that video clip. That huge eye has been seen previously, and is presumably the same eye that appears in the background of an "unused promotional banner image" uncovered by Shrugtal back in March. But seeing it move, and the pupil constrict, as a player soars past kind of puts it in a different perspective. That thing is huge.

Also interesting, and equally mysterious, is the appearance of a "crypto laptop" in the game. It doesn't appear to do anything at the moment, but one reasonably solid working theory is that it's a tease for a new character coming to the game in season 2 named Crypto, who hasn't actually been announced yet.

There may also be a functional element to it, and this is where the whole thing gets a little involved. As broken down by Inverse, the flyers and leviathans (those giant dinosaur things that roam the waters surrounding Kings Canyon) are kept at bay by repulsor towers on the island, so the story goes, but Crypto, for whatever reason, disables them, allowing the creatures to make their grand entrance. They cause all sorts of damage and headaches, until Wattson shows up and builds a new disruptor to shoo them away—although I assume that effort can't be 100 percent successful, if the creatures are still appearing on the island.

There's a tweet that's loosely related to that, too.

I honestly have no idea what it all means. It could be purely narrative window dressing to support the arrival of the new character(s), or maybe Crypto's ultimate involves deploying the laptop to call in a flyer or two to give other players a hard time. Or maybe it's something else entirely! We'll find out more tomorrow when the trailer drops.