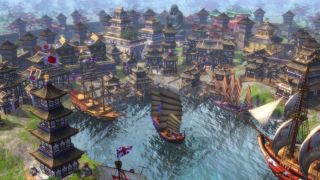 Age of Empires 3: Definitive Edition is the last of Microsoft's Age of Empires remasters, and with the second one out of the way it's the next one on the docket. We've not heard much about it so far, but starting in February, Microsoft will be inviting people into the beta.

If you're eager for an early look, you'll need to join the Insider programme. If you're already a member, make sure your details are up to date and you've uploaded a DXDiag. This doesn't guarantee that you'll get in for the first beta, but several of them will be hosted, with each focusing on a different part of the game.

Make sure your PC hits the system requirements below:

Starting in early February, the multiplayer is going to be put through its paces. The multiplayer betas will be the largest, but at first the team wants to get fans of the original to play—that's the goal for next month. In March, it will be opened up to more players.

The campaign will also be available, but only in small chunks. The campaign beta sessions will be limited to small groups and specific missions, so you'll probably have more luck getting into the multiplayer.

I didn't get into 3 nearly as much as I did its predecessor, but that's made me slightly more eager for this remaster. Maybe it'll hook me this time. I'm also keen to see if there many outright new additions. Age of Empires 2: Definitive Edition felt like an improvement over the first Definitive Edition not just because it was based on a better game, but because the team added whole new civilisations and campaigns.