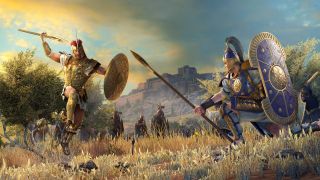 Total War is delving into mythology. For the last couple of historical games, myths and legends have been creeping into the war-torn sandbox, but in A Total War Saga: Troy, Creative Assembly Sofia is taking things one step further, honing in on a conflict where our best source is an epic poem about petty gods and a giant wooden horse. This isn't Warhammer, though, and history hasn't been entirely abandoned.

So there are gods. And mythical heroes. And even a minotaur. The team's drawn on ancient yarns like The Iliad and The Odyssey, but then squinted at them through the lens of history. Maps and archeology have been used to give cities and armies an air of authenticity, and the minotaur is really a big bloke wearing a bull's head and wielding a massive axe. When he's charging at an army, though, the distinction doesn't matter too much.

Just like The Iliad, Paris will kidnap Helen, the Spartan queen, and flee back to Troy, but from there little is etched in stone. Things might play out like The Iliad, and the eight playable factions favour certain paths, but this is still a sandbox. Instead of Greeks uniting, hopping on their boats and besieging Troy, they might just fight among themselves over territory back home. Playing as one of the Trojan factions, you could stop the Greeks before they even reach the formidable city, then take the war west.

The factions will start small and need to use diplomacy, trade and conquest to expand. As Meneleus of Sparta, you won't just be able to gather all of your buddies and sail off to Troy right away. You'll need to wine and dine the other Greek factions and try to form a confederation, or batter them into submission, before heading east with a massive alliance. And you'll be wanting to bring plenty of heroes with you, as well as an elite army, so that means you'll need to spend time building and planning. Troy is a tough nut to crack—it's essentially Total War's version of a boss battle.

This is where the Trojan Horse comes in. Unfortunately, you won't be bundling warriors into the belly of a wooden horse, but there will be events and features inspired by it. Some historians have suggested that the Trojan horse is an allegory for earthquakes, which may have been the real reason the city fell. Poseidon, the god of big waves and big quakes, was also the god of horses, so the wooden horse could represent his wrath. These earthquakes will be present in the game and plague the city, softening it up for attack.

Actual horses won't feature that much in Troy. The Bronze Age Trojans and Greeks used horses in war, but largely for transport or as status symbols. Some warriors will get to ride around in chariots, but cavalry is rare. In their absence, more attention has been given to infantry. There's the introduction of new flanking abilities, the option to switch weapon stances and new terrain types, complete with environmental obstacles.

Heroes are Troy's heavy hitters. Achilles, Agammemnon, Hector—they're all leaders with flashy abilities and even flashier armour. They like to show off in the middle of battles, challenging each other to fights, and during their downtime they can go off on their own epic quests. If you're commanding the star of The Odyssey, then, you'll get a quest to go off and fight in Troy, then you'll be recalled all the way home to fight off your wife's suitors. If you complete the quest chain and reclaim his kingdom, Odysseus will be able to wield a magical bow in battle, and he'll also be accompanied by his son, who serves as a new hero. Typical royals, always with the nepotism.

Unlike heroes, the gods won't be wandering around the map or flinging spears at their enemies, but they play just as significant a role, each representing a different major pillar of the game. Factions need to suck up the gods in the hopes that they'll bring them wealth or skill in battle. Build temples to Ares and slaughter captives after a fight and you'll put a smile on the god of war's face, netting your warriors the reward of being much better at killing. If you need another king to accept a shitty deal or cheer up a gloomy city, however, you're better off making Aphrodite happy.

The campaign map itself is definitely in the running for Total War's most striking warzone. It's around the size of Rome 2, though the scale is smaller, dominated by the Aegean Sea in its centre. Despite the prevalence of the sea, ship combat doesn't really fit with the setting—and has never been great—so you won't be duking it out on boats. The colours are more vivid, the ocean is brighter and it generally has the look of a fantasy map, especially when you hover over imposing Mount Olympus. Even the skybox is a treat, with illustrations of clouds and mountains designed to look like Greek pottery.

Total War Sagas focus on historical flashpoints, but they also seem like a good place for Creative Assembly to experiment and try out new ideas that might not be a perfect fit for the main series. Getting rid of cavalry, for instance, is a pretty bold move, and one I don't think we'd see outside of these spin-offs. So, while the Trojan War isn't really historical, it's the source of some intriguing tweaks to the Total War formula and great fodder for a game that's all about colliding armies.

For more details on Troy, check out the latest issue of the UK magazine, out now on physical and digital shelves.