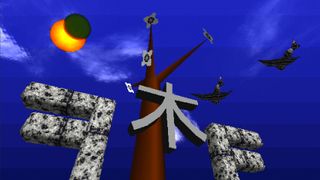 Remember those PlayStation demo discs that were included with the magazines? Remember how you would play those demos ad-nauseum instead of buying and playing the full games they were advertising? Wish they were a little bit more horrifying?

Apparently, so did a load of indie developers, as they've teamed up to release a fake demo disc of PS1-inspired horror games.

Hey everyone, good news! We've set a release date for the Demo Disc and the list of demos is decided. The Demo Disc will release on Thursday The 6th of February at https://t.co/1TAOXhRifN and will include demos of the games listed in the cover image below! pic.twitter.com/S598UhOjaVJanuary 30, 2020

The Haunted PS1 Demo Disc isn't an actual, physical disc, and it isn't for your PS1, but it does include demos for 17 low-res games meant to evoke the same style. Think low-poly models and wobbling textures, charmingly clunky controls and surreal '90s-flavoured environments, all put into an easily-digestible bundle.

The HauntedPS1 community has been around for over a year now, highlighting games that fit in with its idea of a 64-bit renaissance. Probably the most well-known game to fir the HauntedPS1 style is Redact Games' Sagebrush, which launched in 2018 to decent reviews. The collective's Itch.io page already has a large list of other, similar games for you to check out as well, including games like Squeltchin Maze '96, You and the Night and Please Follow.

The demo disc launches on February 6 for free on Itch.io. Let's hope it has that nostalgia-inducing demo disc music to go along with it.