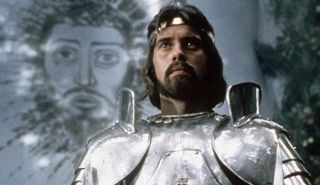 Earlier this month, 80 Days and Heaven's Vault studio Inkle teased its next project with a tweeted list of seven words: Swords, Anguish, Britain, Unrequited, Forests, Hope, and Revenge. I immediately suggested that it sounded like something Arthurian was in the works, as the list seemed like a good fit for both the legend of the Round Table and Inkle's particular style of illustrated storytelling.

Full disclosure: I may have swiped that insight from someone else. Regardless, it looks like I was (they were) right.

That's the extent of the announcement, such as it is, but Inkle did say in followup responses that it's "too early" to commit to platforms, and that the game will be "different" from previous games based on the legend of King Arthur.

The timing of the reveal, and the "Camelot has fallen" phrasing, may also hint at the nature of the game: Today is "Brexit Day," which marks the UK's official exit from the European Union. That may just be a coincidence, but I'm inclined to think otherwise.