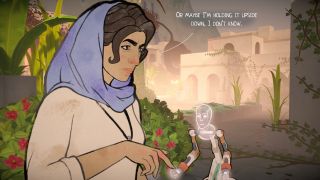 Inkle, the interactive narrative studio whose previous games include Sorcery!, 80 Days, and Heaven's Vault, is teasing its next project—in a very distinctly Inkle-like fashion.

Were it not for the fact that Electronic Arts has an exclusive licensing deal with Disney I'd say with solid confidence that Inkle is making a Star Wars game, but since that's off the table, perhaps something Arthurian is in the pipe? The legend of the Round Table fits the words in the list, broadly speaking, and would also be a good match for Inkle's style of illustrated storytelling. Or it could point to a retelling of the legend of Robin Hood: The absence of "bow" is conspicuous, but its inclusion may have been a little too much of a giveaway.

Most studios, teasing the announcement of a new game coming this year, would post a cute GIF. Here are seven words instead. SwordsAnguishBritainUnrequitedForestsHopeRevengeJanuary 6, 2020

Or maybe it's something else entirely! There's just no way to know. We can be pretty sure it'll be worth paying attention to, though: We selected 80 Days as the best-written game of 2015, and described the archaeological mystery game Heaven's Vault as "exquisite" and "absolutely stunning" in our 88% review. We'll let you know when we know more.