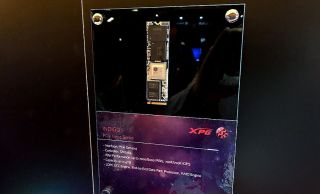 The adoption of PCI Express 4.0 by AMD and its motherboard partners at the tail end of 2019 paved the way for incredibly fast solid state drives, with sequential read and write speeds of around 5,000MB/s when running at full bore. If anyone thought the PCIe 4.0 bus had been saturated, XPG is showing off new prototype models capable of reading data at even more of a breakneck pace. As in, 7,000MB/s and beyond.

That's a difference of *checks abacus* 2,000MB/s. To put that into perspective, some of the best SSDs for gaming are still SATA-based models, with read and write speeds hovering around 550MB/s (such as Samsung's 860 Evo and Crucial's MX500). And in NVMe territory, our top pick, Crucial's P1 1TB SSD, offers reads of up 2,000MB/s and writes of up to 1,700MB/s.

So just the difference in read speeds between XPG's prototype models and the spattering of PCIe 4.0 SSDs is equivalent to the top speed of Crucial's P1.

One of the ingredients in the special sauce that makes these speeds possible is the PCIe 4.0 bus. It offers up twice the bandwidth of PCIe 3.0. On the consumer side, AMD's X570 chipset and latest generation Ryzen processors support PCIe 4.0, as Intel has not made the jump yet.

The controller is another major ingredient, and if you're into technical details, that's where things get interesting. An SSD controller is a dedicated chip that, well, controls the operation of an SSD and in part determines how fast it can read and write data. Every current PCIe 4.0 SSD on the market right now uses Phison's PS5016-E16 controller. It tops out at around 5,000MB/s, as do the handful of PCIe 4.0 SSDs available.

Last summer, Phison said it was working on a new controller that will enable speeds of 6.5GB/s in 2020, and that it would be available in the first quarter of this year. As far as I know, those plans are still intact.

XPG isn't waiting around, though. Of its three prototype SSDs—Sage, Indigo, and Pearl—at least two of them are using non-Phison controllers. The Indigo SSD (pictured top) is using a Silicon Motion SM2264 controller. Here are the specs on that model:

We don't have any details on XPG's Pearl model, though it appears the Sage model will sit at the top of the stack with slightly better performance than the Indigo drive.

The Sage SSD is using a new Innogrit Rainier IG5236 controller, and is among the first drives to do so. Our friends at Anandtech covered the technical details on this controller, if you care do dive into it. But the gist of it is this—the IG5236 enables much faster performance than Phison's E16 controller. Here are the specs on the Sage:

Those are all preliminary metrics. In testing, XPG is seeing even faster read speeds, and the final product could end up exceeding 7,000MB/s. Here's what the demo drive at CES achieved in the CrystalDisk benchmark:

The demo drive peaked at a 7,240.7MB/s for sequential reads, and 5,395.5MB/s for sequential writes. According to our friends at Toms Hardware, XPG expects write speeds to climb past 6,000MB/s by the time Sage enters final production. XPG also indicated these drives will have heatspreaders when they reach retail, instead of the naked designs you see above.

None of this really matters strictly for gaming, at least not directly—there's not going to be a noticeabe difference in game loads in going from even a SATA-based SSD to the XPG Sage. But there are still a couple of reasons to care. One is that these speeds come in handy when moving around large files, or bunches of them, especially for massive backup chores. And secondly, when companies push the envelope like this, it can result in price drops on slower, previous generation models.

On that latter point, there are market indicators that SSD pricing could go up this year as the cost of NAND flash memory chip rises. So, any move to counter the predicted price hikes is certainly appreciated.

XPG didn't say how much its upcoming models will cost, only that they will be out in the second half of this year.