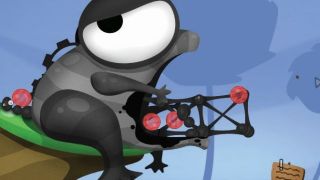 Having long since forgotten the plot of world of goo but not its glorious, weird jelly Meccano physics, I think I was expecting this reinstall to be a mainly sensory experience. Something like Peggle—great music, appealing cartoonish aesthetic—but with a slippery puzzle element instead of pinball, and a streak of black humour involving some goo balls going through a mincer.

I had forgotten the observations about how companies use data and cookies (World of Goo operates in a GDPR-less world), about idiotic, wasteful product launches, about the value of physical beauty and so on. These observations are relatively broad-brush—corporations that put financial gain over consumer welfare, the ugly being trampled by the beautiful—but it’s a tang of playful cynicism I haven’t seen much in games recently.

That’s not to say we’re less cynical now, but there’s a specific flavour of breezy side-eye which feels very much rooted in the late-’00s and is interesting to encounter now. These were the heady days when we were only questioning some, not all, of our metastructures. The result is that its shots still hit their targets (we’ve only really doubled down on what the game calls out) but the mood it adopts is peppy and perky rather than exhausted. Certainly a curio to me right now, at any rate.

The jiggly, chirruping construction side is as excellent as I remember. Have you played World of Goo? If you haven’t, the idea is that you have these sentient blobs which like to attach to one another by sending out tendrils to other blobs. You’ll use this to create structures—2D lattices of varying levels of messiness. Loose goo blobs swarm over the structure, their weight and movement contributing to the instability of the whole thing, sometimes sending it tumbling to one side.

The point of these structures is that you use them to bring the loose goo swarm to an exit pipe which will suck them up. But the pipe only activates when the goo structure is close enough, hence you can’t just fire goo balls into the air and hope they get slurped up.

At a bare minimum, the challenge is to build a structure and reach the pipe with enough loose goo balls to meet the level’s target. Later on in the game it’s about factoring in the different properties of the different types of goo, about navigating obstacles, and even moving larger non-goo objects around.

The levels start off relatively simply. You have one type of goo and plenty of it, meaning it’s easy to meet the level targets. The starter goo is wonderfully uncomplicated. It puts out two tendrils and you can’t detach it once it’s in place. It naturally lends itself, then, to building robust triangular shapes and thus is relatively stable.

These early levels remind me of the weird team-building exercises we had to do as part of a few corporate away days I’ve been on, or as part of school physics projects—build a bridge out of newspaper that’s capable of bearing some kind of heavy weight, or a teammate or whatever. You’d always have someone who spent a whole day explaining the value of the triangle in construction.

“It’s really hard to deform a triangle, you know?” Yes Dave. We know. “Consider the pyramids.” I’ve considered the bloody pyramids, Dave. “It’s because of trigonometry.” Shut up and roll newspaper, Dave. “It’s why you see so many triangles in bridges too.” DAVE THAT IS WHY WE ARE USING TRIANGLES TO BUILD THIS BRIDGE. “Did I show you this picture of a bridge I took while I was away last month?” Yes, Dave. Please just roll some newspaper so we can bear the weight of that encyclopedia and get out of here. “Look! There’s a picture of a bridge in this newspaper! I’m going to cut it out so we can stick it on the bridge as a mascot. It even has triangles.” I swear to god, Dave. “You know what? My favourite triangle is the equilateral triangle.”

Unlike Dave, I have a soft spot for a scalene triangle. They’re awkward and difficult and spiky, like me in a team-building session. Anyway, where was I?

Ah yes. Goo. So there are different types of goo. There’s that first kind I mentioned, but you’ll soon encounter others—green goo, beauty goo, matchstick goo, balloon goo… My favourite is the green goo. It can put out up to three tendrils which is nice, but the best bit is that it can be detached and reused or just left loose. The reason I love it is because I spend a lot of time trying to rescue as much goo as possible from each level. If a level uses plain black goo, every blob you use to build is one you can’t collect. If you’re on the green stuff there’s a chance you can detach it and collect it once you’ve activated the pipe.

Having blasted through the story chapters in a few hours I went back to the beginning to try OCD mode. I winced at the name—another reminder that the world has changed a little, I guess—although it technically stands for Obsessive Completion Distinction. This is the hard mode where you need to meet far more challenging targets. Every ball and every placement becomes incredibly important.

This is where I started to feel real annoyance with the interface. It boils down to the fact the game doesn’t have a quick restart button or a replay option if you reach the end and find out you didn’t meet the target. Having to sit through the end section of a level and start again from the level select screen is just a bunch of extra clicking which gets between me and the challenge. The alternative is to try and work out whether you’ve succeeded or failed before you activate the pipe, so you can use the in-level retry button, which isn’t always possible.

My other gripe is that goo becomes heavier when you attach it to a structure. I’m assuming this is because it is now considered to have the weight of the blob and the weight of the legs attaching it to other goo balls, but where did that extra weight come from? In a physics puzzler, this manifestation of substance from nothing, rather than the blob being spread thinner, feels like a tiny betrayal. “But what of the laws of physics?” Exactly, Dave. I’m with you on this one.

Trying to see if there was a way to quick restart using a mod or some other tinkering is how I ended up on www.goofans.com. This is where you can download GooTool; a utility for installing new levels and goo ball mods. It’s a bit old at this point and requires a touch of Java tinkering, but I’ve found a number of level packs which offer some curious new challenges. You can’t create new chapters for the game, so these levels just hover in the sky in the chapter 1 level select screen—a bit messy-looking, but useful for extending the life of the game that bit further.

I was also considering some of the goo ball colour mods, but the game does a good job of clearly communicating function via its colour coding, so adding a random colour variable felt like it wasn’t likely to help me play (much as I would love to build a riotously bright tower that rivals my Christmas tree for coloured balls).

But all of this is just me distracting myself. I’m clearly going to end up tearing my hair out over how you get one last infernal ball into that infernal pipe on vanilla mode. It’s 2008 all over again.