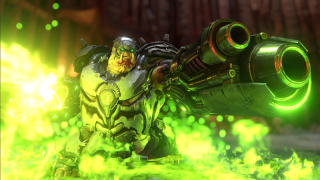 Doom Eternal is just over a month away from its March 20 release date, but that won't stop some people wanting to pour as much demon mush down their eyes in anticipation. Fortunately, IGN's got the first 10 minutes of the game in glorious 4K 60 fps.

As part of IGN's month-long IGN First coverage, the video gives us a spoiler-filled look at the early stages of the game, including the introductory cinematic and the weapons and secrets found in the opening areas. It also shows off the game's improved gore systems, with chunks of demons satisfyingly slopping off them with every attack.

Although IGN's video is mostly the same demon-slaying we know and love, Doom Eternal is placing a greater emphasis on traversing the levels compared to the last outing. Alongside new weapons like the flamethrower and the elemental grenade launcher, Mr Doom is now also equipped with a shotgun-based 'Meat Hook' grapple. With it, he can zip around the levels, or use it offensively and yank enemies towards him for a good kicking.

In our previews of the game, things looked very promising. While there is a sense of linearity that wasn't present in the original Doom games, it's still satisfyingly gory and brutal, while adding enough new stuff to make it not feel like a retread of the 2016 reboot.

Doom Eternal is due to launch on March 20, 2020. For more information, here's everything we know about Doom Eternal.