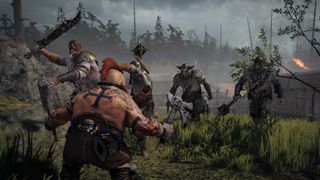 Warhammer: Vermintide 2, Fatshark's Warhammer-themed Left 4 Dead style co-op brawler, is due out in the coming months. Last week I took closer look at the major changes Fatshark is making to the way loot works with comment from the project's lead developers. Today let's take a look at the new progression systems coming to each of the five playable heroes.

Heroes have three careers to choose from

Vermintide 2's roster stays the same as the first game. That means five playable heroes: Bardin the dwarf, Victor Saltzpyre the Witch Hunter, Kerillian the elf, Kruber the knight, and Sienna the Bright Mage. This time each hero will have a choice of three career paths to equip. Each comes with a talent tree designed to express a latent aspect of the character's playstyle.

Take Bardin as an example. He has a Slayer career that exaggerates his damage output, a tanky Ironbreaker career, and a Ranger career that makes him slightly better at range. The career system is designed to work with character and weapon selection to create a layered series of customisation options.

I didn't see the talent system during my hands-on time late last year, so it's impossible to judge how much difference each career will have on how the game really feels, but if the stat boosts are significant the career system has the potential to make weapon selection a more interesting decision. Weapon traits that sync up with talent buffs will surely be desirable at harder difficulty levels and the addition of new super abilities creates space for cool co-op hero moments. Speaking of which...

In addition to talent trees, careers come with a passive ability and an Overwatch-style super ability that you can activate with a cooldown mid-game. Kerillion's Shade career comes with a passive that increases backstab damage, and a super that lets her turn invisible briefly and fly through enemies. It's clear to see how those two will sync up to turn her into an assassin archetype that hunts down special enemies.

Some of the abilities have team-wide utility. Game director Anders De Geer talks about Victor Saltzpyre's Witch Hunter Captain ability, which pushes back enemies and raises downed allies in a radius. Vermintide players know how useful this is bound to be, and Overwatch players will recognise some Mercy in that ability. At high levels Fatshark hopes a detailed metagame will form around optimal career combinations at high levels of play.

Careers will also explore the characters of each hero, and some careers inspired the team to add new weapon options. In addition to the well-rounded Bounty Hunter career and the ranged, damage-dealing Witch Hunter career, Victor Saltzpyre can become a Zealot and wield new flails to show his love for flaying things in the name of Sigmar.  "Victor he is a zealot personality already," says De Geer. " so he just blooms, devotes himself to Sigmar and goes all out."

You can respec talents flexibly

The careers are supposed to be flexible so you can switch roles depending on the team you're fighting with. When you level up with a character you gain a pool of points that you can spend in a career talent tree. You're free to switch careers and respend points between rounds, which means you're not locked into a career or a specific set of talents for your characters.

When it comes to re-assigning talent points Magnuson says "there's no cost. At least, right now there isn't! We'll have to playtest it and see if it needs a cost, but it won't be something substantial."

"We want people to try different builds out," adds De Geer. "A big thing for instance with damage mitigation and stuff like that, when you are new to the game those talents are really important because then you can play on a higher difficulty even if you are not super skilled but you can still talent away part of the damage and part of the challenge, then as you progress you can spend those talent points on other stuff if you're comfortable with your blocking and pushing and handling enemies. You can ease into different situations and learn a class while not being super punished."

Warhammer: Vermintide 2 is due out early in 2018, though there is no precise date yet. If you're based in the UK and you are free the weekend after next, Vermintide 2 will be playable at the PC Gamer Weekender along with all these games.