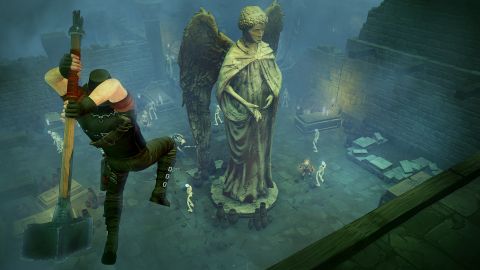 A limp story and weak jokes are worth putting up with for Victor Vrans great combat system.

I’ve been grinding my way through a haunted graveyard and chugging on health potions every few seconds when I have to admit it: I’m getting my ass kicked by a bunch of skeletons and spiders. The sword I’ve been using for the last few levels seems to have fallen behind the power curve, and I’m taking too much damage while I weakly stab baddies to death.

Just in time, I open a treasure chest and find the preposterously named Zealous Executioner’s Hammer of Luck. I equip the monstrous two-handed warhammer and take aim at a nearby skeleton, the first of an advancing horde. He explodes so violently that the skeleton next to him explodes, setting off the next one, until the entire group has been reduced to a pile of calcium after one hit. Well, well, well. This hammer is a keeper.

Like any ARPG, Victor Vran keeps getting compared to Diablo and Torchlight. It is like those games in some ways: there are levels to grind through and loot to find and weapon skills to chain together. But I think it’s more accurate to imagine it as Bastion strutting around in a campy Van Helsing cosplay. Victor Vran’s combat requires more involvement than click-click-clicking through Torchlight, and its sense of whimsy separates it from the (sometimes) self-serious Diablo. To be clear, Victor Vran is not as great as any of those games, but it’s not bad, either. Played with friends in co-op multiplayer, it’s a damn fine time.

Like in Bastion, Victor Vran is an ARPG with all the classes ripped out. The main character, Victor, can equip any weapon and use its two special attacks at any time. There are no character points or skill trees associated with Victor because each weapon is a self-contained class of skills and strategies. Hammers are slow and powerful with some huge area-of-effect moves. Scythes, on the other hand, reduce mobility while attacking but get more powerful the more they’re used. Since there’s no way to level up as a hammer-wielder, Victor Vran’s progression is in finding a better hammer. Or scythe. There are a lot of weapons, and between rapiers, broadswords, shotguns, mortars, and lightning guns, there’s a lot of skills with which to work through the neighborhoods of Victor Vran’s huge haunted city.

Oh, did I say haunted? It might be cursed. I’m not sure it really matters, but the story lost me early on. It’s not complex, it’s just that there’s no reward for following along, and I didn’t care. There’s a city full of baddies, and it’s Victor’s job as a capital-H Hunter to clear it out. He is an exorcist in a vest. He is pest control in a fedora. Spending more time than this pondering the specifics seems like a waste of time.

Victor’s basic skills can be tweaked and augmented by a selection of two Demon powers—powerful spells with effects that summon meteors, unleash explosive shockwaves, or draw down a roving pillar of fire. Destiny cards modify character stats like increasing ranged damage, increasing health, or making enemies explode on a critical hit. Between weapon skills, throwable grenades, Demon powers, and Destiny cards, there are a lot of tools to fling at the army of the undead. Combining powers with a friend in co-op, wading into a seething pile of nasties and making the whole dungeon go sizzle, is undeniably fun.

Amazingly, all of the skills and spells and boosts and weapons are all nicely balanced. I prefer the sweeping strokes of the broadsword, but I can’t say that it actually kills stuff better than the rapier or scythe. With so many moving pieces, I’m impressed that everything evens out so well. The downside to this system, though, is that it’s heavily dependent on getting a great main weapon. Usually I found my gear through loot drops, but occasionally I had to turn to the incredibly expensive gear vendors in the main castle. If I didn’t have cash reserves and failed to get a lucky drop, the game became a slog with an underleveled weapon.

Victor Vran is reminiscent of Bastion in the way its combat and characters work, but it also attempts something similar to the reactive narrator that made Bastion famous. The posh but obviously evil inner voice narrates Victor’s travels, commenting on his actions and occasionally taunting him. It’s nowhere near as reactive as Bastion’s narrator, speaking much less frequently and referencing on-screen events much more vaguely. Though I mostly enjoyed it, I found that the Voice’s jokes fall pretty flat when they winkingly break the fourth wall.

Though the narrator does most of the comedic heavy lifting, enemies and puzzles in the game are not without a sense of humor. My favorite moment came when I discovered a secret enclave of enchanted dancers, skeletons wearing wigs and sunglasses and dancing to Gangnam Style. It’s a dated joke, sure, but it is achingly sincere and it made me laugh. Eventually, because even cheerfully dancing skeletons are evil, I had to break up 2012’s most irritating viral dance craze with a shotgun.

I never had a crash with Victor Vran, and my PC chewed through dense dungeons and a lot of particle effects without so much as a stutter. I did notice some screen tearing and framerate drops during cutscenes, but these are so brief and rare that it wasn’t much of an issue. Maybe I’ve been swimming too much in the Early Access area of Steam lately, but it was really refreshing to see an indie game with such a high level of polish applied.

Victor Vran would be a real standout if we didn’t already have Bastion’s narrator, Diablo’s combat, or Torchlight’s cartoonishly attractive loot system. It’s good while simultaneously being not as good as the games that dominate this genre. Still: all of those games were released years ago, and fans of dungeon-crawling click-em-ups are always hankering for more. Victor Vran will scratch that itch, and might even become a standby favorite when played with friends.

Thumping skeletons with a hammer never gets old.

Most skills execute with a flashy animation or two, so every battle turns into a disco.

The least-fun fights in the game are against bosses. They’re rare, but they’re usually a grind.

Areas are sprawling and richly detailed, and the rotating camera sometimes reveals secrets.

You’re not the only one with area-of-effect attacks. Getting caught in a cursed zone will mess up your day.

A limp story and weak jokes are worth putting up with for Victor Vrans great combat system.