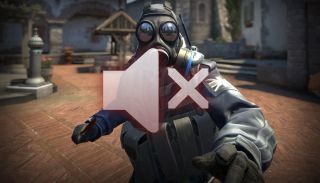 Team-based games like CS:GO require coordination between players. Coordination requires communication, and communication, unfortunately, generally requires talking to other people. This is where the wheels tend to come off, because while some players will use the power of comms to set ambushes or warn about incoming enemies, others prefer less friendly approaches to chit-chat. You know what I mean.

To help clamp down on that sort of garbage, Valve is working on a new system for Counter-Strike: Global Offensive that will help cut down on in-game abuse more "precisely" than current tools. It sounds fairly straightforward, in the broad strokes at least: Players who receive "significantly more abuse reports" than others will be given a warning, and if the abuse reports continue at a high rate they will then be automatically muted by all others players by default. Other players will be able to unmute them if they want, but the muted-by-default state will remain in place until offenders earn enough XP to remove the penalty.

"Because the new system is driven by reports, it lets players establish their own standards for communication and ensure that their fellow players receive anonymous feedback when they're out of line," Valve said.

As is the Valve way, the whole thing is driven by algorithms: Specifics on what constitutes "significantly more" reports of abuse than the baseline (whatever it is) or what you'll have to do to shed that albatross weren't shared, but reports are weighted based on each account's playtime and reporting frequency, which should help reduce the likelihood of abuse. Valve is already tracking reports with the new system, and asked that players help feed the machine by "getting into the habit of reporting abusive players for 'Abusive Communications or Profile' when you come across them."