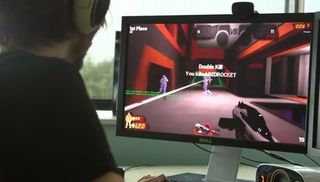 The new Unreal Tournament keeps surprising me with how far along in development it is. Recently, for instance, we saw concept art that was, in fact, a fully rendered level . Now, we get to see the game's team deathmatch mode being played. No big deal, right? We've seen nu-UT deathmatch before . Only this time, the team say they've got all weapons working in the game.

If I had one wish... well, it would be to get my hands on the game to test its feel in comparison to previous UTs. If I had another, though, it would be for Epic to install Fraps or similar, so we could finally see some direct-capture footage.

Want more info? For an insight into this new Unreal Tournament's crowdsourced development plan, check out our Epic interview .