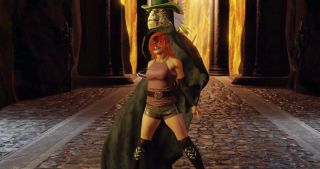 WWE 2K20 might be in slightly better shape than it was when it launched—a low bar—but at the start of 2020 is was up to its old tricks again, according to players on the subreddit and on Twitter, crashing when they attempted to play most of its modes. It turns out it wasn't quite ready for the change in year and briefly freaked out.

January 1 is a challenging time for everyone, what with the hangovers and the knowledge that, just over the horizon, work is looming. For WWE2K20, it proved to be just too much, but a temporary solution was posted on Twitter by TheShiningDown. The game needed to be tricked into believing it was still 2019.

hey #WWE2K #WWE2K20 players! crashing when trying to create anything? crashing when entering the Originals menu? you're not alone! but I've got a fix!change your system date 1 day back. @WWEgames fucked up the game and made it force close in 2020 on most modes. not kidding. RTJanuary 1, 2020

Thankfully, wrestlers no longer need to fool the game, with 2K's support team announcing that the problem has been resolved.

In November, the 1.03 patch had to be rolled back after it started corrupting save data, and things were even worse at launch, so this this feels a bit par for the course. It hasn't stopped it being one of the best new releases of 2019 on Steam, based on gross revenue. Critically, however, it's been panned.

Last year, it was Fallout 76 having problems on January 1, when players found that they weren't able to access nukes. In that case, the problem at least felt appropriate for the game—a New Year's armistice where everyone stops dropping bombs sounds quite nice. Sadly it never caught on.