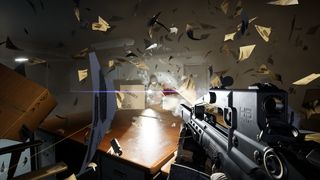 There have been a lot of attempts to recreate the FEAR games over the years, with varying success. With a recently released demo on Steam, Trepang2 is one of the more promising that I’ve played. The fairly short demo, and accompanying horde mode, is a gory blast from the FPS past in how it mixes slides, melee, and bullet time. It even has a creepy thriller aspect, making its influences all the more apparent.

While the environments for this demo are a bit stark and bland, I’d overlook them in favor of the thrilling combat. The guns feel good, the feedback on movement isn’t bad, and it really encourages you to keep moving by letting you slide, vault, and kick your way around the rooms. The combat also seamlessly blends from stealth to firefight and back again. I was—and I don’t say this often—actually impressed by the way the AI reacts too, fanning out and getting multiple angles to attack me from as I slid from cover to cover.

The four person team at Trepang Studios has been working on the game since 2017, when it was built as a prototype. The 2018 demo was voted top 100 for 2018 on IndieDB. This is one to keep an eye on as it moves further into development. You can download the demo and watch a trailer over on Steam. You can also check out the Trepang2 official website.