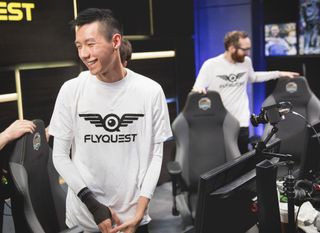 After weeks of waiting, the LCS spring split is now underway. A while back I went over the teams that make up the North American LCS and their rosters. Now that the competition is underway, we’re seeing some interesting results. Of course, the first week’s standings aren’t set in stone; there’s a lot of room for rosters to evolve, teams to rise and fall, and your favorite teams to stumble.

However, it’s worth looking at these early weeks to get a sense of where teams are starting and where they need to go: a story isn’t a story unless it has a beginning. After weeks of post-Worlds antsiness, I’m eager to see how these teams roll with the punches and race for the top.

Everything about FlyQuest seemed rushed, from their last-minute pickup of Moon as their jungler, to their overall branding, to the t-shirts they wore that seemed to have been made via printer on Friday night. Their team, made up of the core of old guard Cloud9, was seen quite skeptically heading into the opening week. Balls and LemonNation were considered lower tier players who were past their prime, Altec was a respectable plug and play NA ADC who would be better suited on another team, and Moon had struggled in his last time in the LCS.

While all of this was a fair assessment, there was the Hai factor to consider. Hai Lam retired from Cloud9 in April of 2015, and he hasn’t played mid lane until now. He returned to Cloud9 when they struggled in his absence, risking relegation, and picked up the jungle role. When Meteos returned to the jungle, Hai played support. His shotcalling not only saved Cloud9 from relegation but took them to Worlds.

His shotcalling remains one of the most fearsome threats in the LCS, as FlyQuest picked up a 2-0 lead on their first week and are tied for first. FlyQuest may sound like an iPhone game with a suspicious microtransaction model, but they’re overcoming expectations on the Rift.

Speaking of first place: there’s another team up there, and they’re quite familiar to FlyQuest...

Cloud9 live up to the hype

Cloud9 made minimal changes to their roster from last year: they picked up Ray as a top lane sub and promoted Contractz from their Challenger squad. TSM versus Cloud9 was meant to be a barn burner—two North American titans going head to head after their strongest seasons yet. Instead of a nailbiter, close match, Cloud9 dominated. Part of this is likely due to TSM’s shaky start (more on that later), but there’s no denying how brightly C9 shone on the stage.

They faced Dignitas next, a squad with high hopes on their shoulders, and came out ahead there as well. Most of their decisiveness can likely be attributed to coaching during the off-season by the legendary Reapered. Mid laner Jensen has spoken about his increased synergy with Contractz, and also how he’s stepped up and become more vocal as a leader. Cloud9 look like the strong favorites so far, especially because...

The terrible tale of TSM

Team SoloMid had an odd story last season. They struggled in spring’s regular season, entering the playoffs at sixth place, before rallying and making second place. They switched out Yellowstar for rookie Biofrost, but kept the rest of their team, and smashed summer. They only dropped one game to Phoenix1, and took the championship. It wasn’t an effortless endeavor—the team had clearly been working in overtime. While the NA LCS championship was nice, they had Worlds in their sights... and they failed, not even making it to the quarterfinals.
After such a disappointing end to the momentum they had built throughout all of 2016, many anticipated they’d come back stronger in spring.

There was just one hurdle: they lost shotcaller and ADC Doublelift, and replaced him with one-time ADC WildTurtle. WildTurtle and TSM was meant to be a plug and play arrangement, but it seems like TSM haven’t quite figured out how to make the new arrangement work. They lost 0-2 to Cloud9, and pulled out the win in a 2-1 messy series against Immortals, a team that had only been together as a core in North America for a day when the matches began.

There was one consistency across all of the games, whether it was Flame picking up a quadrakill on Fiora against TSM or the constant, scrappy fights in the bot lane that happened all weekend long, and it was that everyone was looking to draw blood. Gone are the days where teams would lane swap and languidly shove down a tower before deigning to group up. Now, everyone’s looking for early kills and early gold leads.

This doesn’t mean the games are short. They’re bloody, but many of them stretched on well past the 40 minute mark. This suggests that teams are still figuring out the best way to close out a game. While the matches are entertaining to watch, we’re still standing in the shadow of last year’s Worlds, where every NA team ended up struggling against their Korean overlords (or, in some cases, even the Wildcard region).

Sure, it’s only week one of spring, so it’s far too early to make any judgements. We’ll likely see every team shape up and start showing a much better form as we progress throughout the split. However, every North American team is going to be looking at the end game. It’s not about escaping relegation or doing well enough to get by. Every team is looking at the end of the year and hoping they can be among the teams who will represent North America as a region at Worlds. Spring may be lower stakes than summer, where the winner gets an automatic ticket, but it still can weigh in heavily—just ask Counter Logic gaming, who got into Worlds last year based on their spring points. It’s still early yet, but every team is going to be fighting to improve in the coming weeks and kick their opponents down the standings.