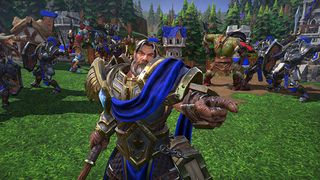 The launch of Warcraft 3: Reforged in January was, and continues to be, a surprisingly ugly affair. It's one of the most beloved RTS games of all time, yet the release of its long-awaited remastered edition has inspired widespread outrage over everything from cut content to an EULA that lays exclusive claim to any and all mods and other content you may create for the game.

The situation is bad enough that Blizzard is now forgoing its usual refund policy limits, and offering "refunds upon request" to any Warcraft 3: Reforged owner who wants one. And during Activision's Q4 investors call today, Blizzard president J. Allen Brack acknowledged that it's been a rough ride—but also said that Blizzard isn't finished with it yet.

"Concerning Warcraft 3: Reforged, honestly, it's been a bit of a hard week. Our community has come to expect really amazing things from us, and we've heard from them that we did not achieve that bar," Brack said.

It's unclear how far Blizzard is willing to go to address complaints, however. An update posted earlier this week said that bug fixes and various online features are on the way, and promised that Blizzard will "continue fine-tuning things" in the future. But "fine-tuning" isn't likely to cut it: The dissatisfaction lies at a much more fundamental level, with things like enhanced cutscenes and an improved interface that were promised but not delivered, a removal of features from the classic version of Warcraft 3 following the release of Reforged, and that EULA, which as we said in our outrage explainer is "a blatant reminder that Blizzard is a company first and foremost, with legalese that puts profits before players."

Coupled with the loss of the goodwill of its fanbase over the past couple of years, and particularly in the wake of the Blitzchung controversy, it makes for a very steep mountain for Blizzard to climb.