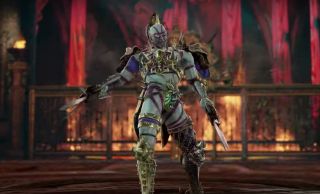 Voldo is coming back for Soulcalibur 6.

Bandai Namco confirmed the "eccentric" (their words, not mine) opponent by way of a brief video teaser that shows him off in his full, spike-encrusted-crotch glory. Here, take a look:

"The Guardian of The Vault, Voldo rises up once again!" teases the video description. "Armed with this signature Katar, Manas & Ayus, he will slash anyone foolish enough to steal his treasures."

Voldo is the latest in a long line of characters announced for the sixth Soulcalibur game. Also confirmed are Sophitia, Mitsurugi, Nightmare, Xianghua and Kilik, the eye patch-wearing Grøh, and, last but never least, The Witcher's Geralt.