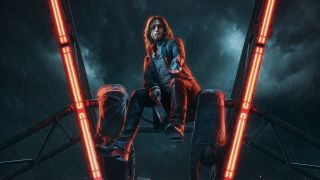 When Paradox Interactive acquired White Wolf, hope of a Vampire: The Masquerade—Bloodlines sequel surged again, including at Hardsuit Labs. The studio that was last week revealed to be developing Bloodlines 2 wasn't approached by Paradox, however, and the publisher already had its own plans.

"When we got wind of Paradox acquiring the World of Darkness IP, within about ten minutes I had my creative director Ka'ai Cluney come into my office and say 'We need to contact Paradox. Do you know anyone there, because we need to pitch them a game?',"Andy Kipling, CEO of Hardsuit Labs, tells us. "We spent November and December and January putting together a pitch that we could show them at DICE. My assumption, for what it's worth, was Paradox had a clear plan in place and that we would be coming in from out of the fold to try and make a hail-Mary pass."

A meeting was arranged, but Paradox wasn't expecting this to be the start of a new game. It was hesitant to give away the keys to White Wolf's supernatural universe too easily.

"I went into that first Skype meeting with them expecting to watch a burial," says Florian Schwarzer, product manager at Paradox Interactive. But it wasn't a burial. "This was very much Hardsuit Labs taking a tremendous risk and getting us to the point were we made a decision for them. Nothing more, nothing less."

For more details about Bloodlines 2 and the rest of this interview, check out our upcoming cover feature in the PC Gamer magazine, available next week.