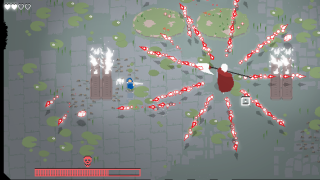 Developed by one person, Jacob Williams, ITTA is Cuphead meets Hyper Light Drifter in a surreal, mysterious pixel art world. You play as a young girl, the titular Itta, who is armed with her father's revolver and accompanied by a ghostly, floating cat.

"Itta explores a strange world inhabited by powerful cosmic beings in search of answers and peace," says Williams. "Players must seek out the powerful beings locked away beneath this seemingly peaceful world and go toe-to-toe against them in harrowing battles."

The game will see you battling "ancient golems" and "toothy horrors" and will apparently push Itta, and the player, past their limits.

There's an interesting story behind ITTA's development too. Williams said he started designing the game when he was staying in a psych ward in December, 2016. "I was at the lowest point of my life," he says. "Itta is Japanese for gone. It was to be a bleak, depressing game, with no hint of levity or hope."

But when it was time for Williams to leave the ward, a fellow patient gave him a goodbye present—a papercraft she made. "As a reminder to myself I made her papercraft a prominent symbol in the game, dotted around the world. And as my outlook on life slowly began to change, so too did the game. I didn't want ITTA to be devoid of light anymore."

Wow. It's a touching story, and makes me want to play ITTA all the more, which I'll be able to when it's released on PC sometime this year.