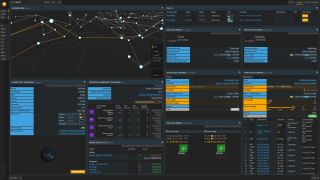 I’m not sure if you’ve heard, but people really like games about economics. They like them even more so if you put the economics in space. Prosperous Universe is a browser-based space economics MMO that puts you in ownership of a company in newly-settled human space. Running the company is handled through the in-browser APEX interface, a customizable framework that uses all kinds of tricky little text codes to bring up new windows for buying, selling, and transferring goods. It takes place in real time, so most players only log in one or two times a day to check their trades or send ships out with goods. It is in active development, with the game recently adding player elections for planetary governorships.

Prosperous Universe is currently in an Alpha “first access” period while it stretches its legs and adds features, and that’s free to play right now. Free players are very slightly restricted in how they can interact with others, but their progression in the game isn’t meaningfully impacted. A full license for the early access period is a measly €10/$11/£8.50—or a bit more, if you want to bring along some friends or name a planet after your dog or whatever.

I’ve been playing it for a couple months now and I’m pretty impressed by the experience. At least, enough to give the developers some money and invite friends to play. The new player experience is lethargic, with the game taking a while to really engage you—at first, you really only do one or two things once or twice a day. Once you’ve established your company on one of the core planets, really started to produce and trade, it’s a pleasure to chart out economic schemes and play the commodities markets for profits. I’ve gone so far in that I’m making spreadsheets to plan my company’s future. A true pinnacle of computer gaming.

Simulogics is a small studio in Germany who also run niche browser MMO AirlineSim. You can check out Prosperous Universe on its official website. Here’s a trailer: