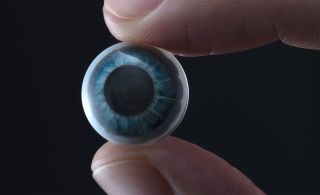 A startup has built what it claims is the "world's first true smart contact lens" with an embedded display that would bring augmented reality experiences closer to your eyeball than ever before.

The company is called Mojo Vision, and its Mojo Lens is the culmination of over a decade of research, development, and patent filings (it's racked up over 100 patents to date). While it's not shipping a product (yet), the company is currently demonstrating a working prototype.

"After extensive research, development, and testing, we are excited to reveal our product plans and begin sharing details about this transformative platform," said Drew Perkins, CEO at Mojo Vision. "Mojo has a vision for Invisible Computing where you have the information you want when you want it and are not bombarded or distracted by data when you don't. The technology should be helpful, and it should be available in the moment and fade away when you want to focus on the world around you."

There's some fancy technology at play here. Having a functioning, built-in display in a contact lens is obviously an achievement, but Mojo Vision also claims it is the smallest, densest display ever built at 14,000 pixels per inch. To put that into perspective, the pixel density in the Oculus Rift S, one of the best VR headsets, is 538 ppi.

"The Mojo Lens incorporates a number of breakthroughs and proprietary technologies, including the smallest and densest dynamic display ever made, the world’s most power-efficient image sensor optimized for computer vision, a custom wireless radio, and motion sensors for eye-tracking and image stabilization," Mojo Vision explains.

Aside from the possible entertainment and business avenues, Mojo Vision hopes to bring its technology to children and adults with blindness or impaired vision through a partnership with the Vista Center for the Blind and Visually Impaired. Enhanced image overlays with real-time contrast and lighting adjustments, as well zoom functionality, are some ways Mojo Lens could help.

Though there are several potential markets, there also exists a fair number of hurdles. One of them is dealing with the US Food and Drug Administration. In addition, according to The Verge, the working prototype is hooked up to an external battery and processor. Mojo Vision is aiming for all-day battery life, and the contact lenses would recharge through a proprietary induction system while being disinfected at night, the company says.

It's not clear how far in the future we are looking at for an actual retail product. However, Mojo Vision has raised over $100 million in investments so far, and is led by a team with resumes spanning some heavy hitters in tech, such as Apple, Amazon, Google, HP, and Microsoft.

*Correction: An earlier version of this article erroneously stated the display is 2 million pixels per inch. It’s actually claimed to be a 14,000 ppi display, with a “pixel density” of 2 million ppi.