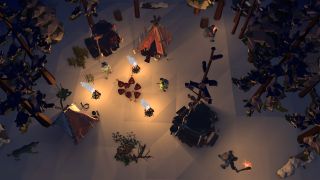 Co-op survival game The Wild Eight was revealed in February with a trailer and some screens, and is now a little over halfway to success on a $50,000 Kickstarter campaign. The premise sounds like a lot of fun—a handful of plane crash survivors must work together to stay alive in the harsh Alaskan wilderness, and of course one of them is a cannibal lunatic—and now there's a “pre-alpha” demo so you can get a little taste of what it's like.

The demo doesn't support multiplayer, but it does showcase the game's visual and play style. You start off building a basic shelter, and then a fire—never mind that the whole plane is already on fire—after which you'll get into crafting, upgrading your skills, and journeying toward the rugged life of an intrepid woodsman.

“Please keep in mind that this is still pretty early and that you'll probably encounter some bugs,” developer 8 Points explains in the demo's introduction. “The sole purpose of the demo is to give you a tour of the core gameplay mechanics currently implemented in the game.”

The demo, which weighs in at a relatively light 230 MBs, is available for direct download here. The Wild Eight Kickstarter comes to an end on May 13.