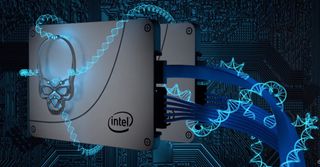 My main PC is currently sitting pretty with not one, but two solid state drives (in RAID 0, because I like to live dangerously). The primary storage in my laptop is an SSD as well. This wasn't practical a decade ago, with prices starting at around $3 per GB. Those high prices and low capacities prevented me from demoting my hard drive to its current title of "Head of Secondary Storage Chores," duties which include catching any overflow from primary storage, backing up important data, and generally just occupying a 3.5-inch bay in my desktop.

I'm not saying the hard drive is dead, and not just because Jarred already said it. Data centers and cloud backup facilities like Backblaze still rely heavily on HDDs, as the cost per gigabyte is more attractive than it is for flash-based storage. Even in the home, it's not a bad idea to employ a HDD for regular backups (you are backing up your important files, right?), or to fill out a network-attached storage (NAS) appliance to serve as your media hub. But one of the developments I'm most appreciative of in the past decade of hardware innovation is the SSD's transition from a luxury product to a staple of the modern PC.

These days, it simply doesn't make sense to build a gaming PC (or just about any system) around a comparatively pokey HDD. It's an SSD world.

This was not always the case. Ten years ago, SSDs hadn't come close to hitting their stride. The modern SSD as we know it was still in its infancy at the start of the decade, having only recently evolved from one of the first mainstream options, a 2.5-inch 32GB SSD from Samsung with a PATA interface (remember PATA?) and a staggering $699 price tag. Oof!

Though the evolution to a viable mainstream storage option was underway in 2010, it would still take a few years for the SSD to rise in earnest. To wit, IHS (via ZDNet) issued a report in 2013 saying SSDs had only penetrated a measly 6 percent of the PC storage market the year prior. That translated to 31 million SSD shipments in 2012, compared to 475 million hard disk drive (HDD) shipments. Today, the landscape is much different, as this graph at Statista shows—HDDs are still outshipping SSDs, but the gap is expected to shrink to 30 million next year, with SSDs overtaking HDDs in 2021.

Price was not the only factor at the beginning. There were budget options in 2010, but in retrospect they weren’t all that tantalizing. Intel’s X25-V, for example, only came in a 40GB capacity and it sold for $125. That’s over $3 per gigabyte. Likewise, companies like Kingston and OCZ started to compete in the budget realm, the former with a 30GB SSDNow V series drive for $90 and the latter with 32GB Onyx model for $85 (the 64GB version ran $185).

These weren’t exactly speed demons by today’s standards, either. OCZ’s 32GB Onyx SSD offered sequential read and write speeds of up to 125MB/s and 70MB/s, respectively. Still, the tech community at large lauded the release of low capacity SSDs at budget price points, because dammit, owning an SSD no longer required spending hundreds of dollars. And though they were slow by today’s standards, they still outpaced mechanical hard drives.

So that’s where we stood a decade ago—on the cusp of a storage revolution, but still lamenting the high cost overall. Yes, budget options existed, but after installing Windows 7, a 32GB SSD barely had room for anything else. The choice, then, was to stick with a mechanical hard drive, make do with a relatively miniscule SSD, or pay a hefty premium for a larger capacity SSD.

What kind of premium, exactly? Here are some of the options that existed in 2010:

For many people, myself included, owning even a moderately capacious SSD was cost-prohibitive. Fortunately, it wouldn’t stay that way. Memory makers began diverting more resources into SSD production, and by 2015, prices had plummeted to around $0.33 per gigabyte on the low end.

First we migrated to 64GB and 128GB SSDs as install drives. Still small, without the space for many games once Windows was onboard, but completely manageable. By 2015, much bigger drives were affordable. Whereas a 240GB ran north of $600 in 2010, you could own a 1TB SSD for around half that price in 2015.

From then on, the landscape changed, save for an unfortunate blip in the timeline where the cost of NAND flash memory chips shot up in price (this is ultimately what led OCZ to sell its business to Toshiba). Over the past couple of years, however, prices have steadily been declining. Even better, the point of diminishing returns creeps in rather quickly—some of the best SSDs for gaming are SATA 6Gbps models, like a 1TB Crucial MX500 SSD. It costs just north of $100. Some competing models even hover in the $80 range, or about $0.08 per gigabyte.

SSDs have gotten faster and better, but their changing price is ultimately what made them one of the biggest developments of the decade. An SSD drastically improves every aspect of computing. Boot times, system responsiveness, file transfers, and game loads are all much better with an SSD compared to a hard drive, and they're now the default. Even the next-gen consoles are going to launch with SSDs.

Where do we go from here? Will the HDD finally join floppy disks and ZIP media the digital graveyard in another 10 years? Those are good questions, and I'll be happy to answer them in another decade.