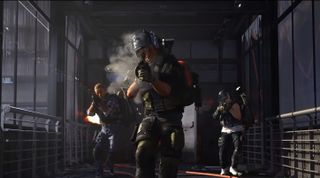 The Division 2 introduced its very first raid, Operation Dark Hours, yesterday. Five hours later, it had already been conquered. With plenty of time to prepare, there were no doubt lots of agents ready to descend on the airport when it opened its doors, but it was streamer Marcostyle and his POG clan that came out the other end first. It took some doing.

With Black Tusk troops infesting the airport, toting new, advanced gear, the raid promised to be a tricky one; it sounds like it's lived up to those expectations. Marcostyle and his fellow agents spent most of their time fighting the last boss, a gargantuan, drone-spewing truck. They wiped, picked themselves up and went back in again and again. They finally destroyed it five hours after the raid started. Watch the moment they blew the behemoth up below.

You can check out the entire encounter here. You'll want skip most of the first two hours of the video, which is just Marcostyle reading patch notes and quietly watching a dev update from Ubisoft. The attempt begins around the 1:49:30 mark.

Other teams followed shortly, but Marcostyle and his cohorts will be the only ones to get their picture put up in the White House. Other players who finish it between now and May 23 will receive a commemorative arm patch. Everyone will get a banner icon and a trophy. The real rewards, of course, are the new gear sets and exotic weapon you'll have a chance of a grabbing.

Even before you try to take it on yourself, there's another hurdle to overcome: Operation Dark Hours doesn't have matchmaking. While it's not uncommon for MMOs and online games to make players find their own group for raids, it's still ruffled some feathers.

"Operation Dark Hours requires players to align on their unified goals and strategies, from defining each agent’s build and coordinated efforts on the fly to overcome the unmatched challenge awaiting them at the Washington National Airport," developer Chris Gansler said on the forums. "The raid will require very good communication between agents, adjusting to situations on the fly and fire power alone will not be the decisive factor to get through the National Airport. Therefore, our decision was to not include matchmaking, as the difficulty level is designed for coordinated groups and clans, that will prepare, plan and execute their strategies."

For the time being, that means you'll have to hit up the Looking for Group channels on Discord or try your luck on Twitter by using the #LFGDarkHours hashtag. I'm not sure how picking up randoms on Discord or Twitter will ensure better communication than a matchmaking system. An in-game option is in the works, at least, but there's no date for it yet.

Check back next week for our impressions of the raid.