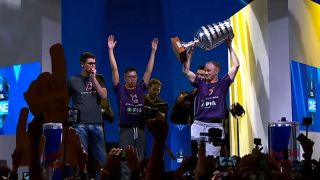 At the end of an intense weekend of Dota 2 Digital Chaos took the grand prize at ESL One Genting in the mountains of Malaysia, the first-ever LAN win for the squad. The team took home $125,000 for the victory, while runner-up team Newbee, hailing from China, ended their own impressive run with $50,000.

Each player beamed with excitement as they stood together with the trophy. MoonMeander barely had words as the stage host asked how he felt. It was their first LAN tournament victory, a massive milestone given how close the TI6 challengers came to holding title before losing to Wings in the grand final.

Reso1ution even grabbed the mic to brag. “Our first tournament! Woo!”
“We won Saksa a LAN, guys!” joked MiSeRy, the captain and one of the support players. “First LAN win ever, guys! Congratulations!”

As a last word to the venue, Reso1ution made his feelings clear for the enthused crowd: “I love you!” And because a winner can’t be excited enough, he added again— “Woo!”

The victory came after an intense series versus Chinese team Newbee that spanned the full best of five, including a 51-minute match two taken by DC. Both teams were seen as strong contenders going into the matchup, with Newbee’s relatively fresh blood seemingly tapped out and DC’s full potential being similarly exposed after each suffered rough runs at the Boston Major. Aside from the strength of the finalists, competition was tight for every team going into the tournament.

CIS favorite Virtus Pro was predicted as a reliably strong pick at the beginning of the event. They were looked upon as a mid-game powerhouse, spawning an aggressive meta after winning The Summit in November that other teams picked up into later tournaments. Unfortunately, the team dropped to the lower bracket, tried to fight through, and were eventually defeated by the versatile, soon-to-be champions DC in an action-packed semifinals matchup.

The semis between Chinese rivals Newbee and Wings were nothing to shake a finger at as each team kept their eyes on big late-game plays. Newbee stomped their national rivals in a short first game, but Wings had to be dragged out kicking after winning the second game. The teams went back and forth in tense and exciting second and third maps that brought the ticker over 45 minutes. Ultimately, in a final game, Newbee held control of the map despite a Wings draft, including Broodmother, that attempted to do otherwise.

Malaysia had its eyes on Fnatic, a local team recently featured in Valve’s documentary True Sight during their failed fight through the Boston Major qualifiers. Led by veteran Mushi after an anxious post-Major shuffle, the team sadly fell through both the group stages and losers bracket after losing to, respectively, VP and Canadian fan favorite NP.

Also representing the locality were Execration from the Philippines and WP.Unity from Malaysia, both of which won their respective local qualifiers. Execration likely had a bone to pick with WP.Unity, as the Filipino squad took second to WP in the SEA Kappa invitational cup in December. After a strong three matches, Execration eliminated their local rivals, though they fell to Wings in the next round.

NP remained a crowd favorite despite losing to VP in the quarterfinals. After losing to the eventual 2nd place winners in the group stage, they showed potential after wiping out Fnatic 2-0 in the first Bo3. Unfortunately, VP gave the same treatment. The team still got a lot of love from its fans due to the team's openness about its everyday life (including its affinity for anime, as the team lists its MyAnimeList links on its homepage). For instance, MSS shared his experience with food culture after buying “Sky Juice”—meaning water (“juice” taken from the sky, meaning rain). The incident became an inside joke throughout the event and its segments.

Beyond the rivalries and memes, there was no shortage of interesting drafts during the event. Meepo was drafted not once, but three times: once at a loss for none other than DC’s w33ha, famous for his “w33po” gameplay; another time victoriously for the Filipino Execration player Gabbi, against local rival WG.Unity; and finally for Newbee’s uuu9, in a winning game against Wings.

Every pub's favorite hook-thrower Pudge was picked five times by four different teams with varying results. In alignment with Wings’ reputation for unusual picks, they attempted to win with Broodmother in their third semifinal match against Newbee, unfortunately to no avail. Overall, 63 heroes were picked throughout the tournament, which is a great sign: every match was gripping for spectators.