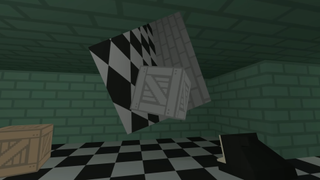 Look, before I even talk about this, just watch the video:

Indie Developer Matt Stark has tweeted a video of his idea for a game on twitter. It’s what he’s callling the “Polaroid Effect,” after the once-ubiquitous instant cameras. The experimental game mechanic allows a player to take a picture of a slice of environment using a camera, then place the instant-camera picture into the world as a piece of interactive environment—physically altering the world around them into a surrealist photo collage.  He first posted the concept in November 2019, but was then unsure if what he has done now was even possible. “The effect is purely visual and the player can’t physically interact with it,” he said at the time. It’s clear now that Stark’s development has come pretty far. Stark hasn’t said what kind of game he’s interested in making with the concept, but with some 50k retweets and 150k likes on his concept the idea definitely shows promise.

When Portal first came out a lot of people were absolutely boggled by the ability to look through the portals and see what’s on the other side. That’s pretty much how I feel about this. I'll politely remind you that game design students thought up the primary mechanics for Portal. Matt Stark is a game design student. His released game project, so far,  is a free puzzle game on the Android Store.