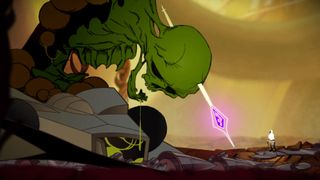 Despite being expected to come to an end along with 2019, it appears that the Epic Games Store is going to continue its weekly game giveaways for awhile yet. After finishing the year with 12 freebies over 12 days, and starting 2020 with three more, Epic has made the hand-drawn Metroidvania Sundered: Eldritch Edition free for the taking, and has another one teed up for next week.

Sundered is up for grabs until 11 am ET on January 16, at which point Horace, "a massive platformer with an even bigger heart," will take its place. Horace, which released on Steam in July 2019, isn't actually available on Epic yet, but is slated to be free from January 16-23.

Epic still hasn't formally committed to ongoing free games in 2020 as far as I know, but neither has it said (or even hinted) that the well is about to run dry. And for now, the new games are still coming, so we'll continue to remind you about them when they show up. After all, nobody wants to miss out on free stuff, right?

You can grab Sundered for free here, while Horace—when the time comes—is here.