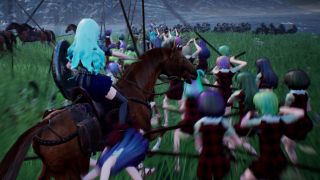 It's been a long wait for Mount & Blade: Bannerlord—about eight years, give or take. And when Bannerlord does arrive this March it'll be in Early Access, which means the complete game could still be years away, for all we know. And so like myself, fans of the series might be feeling desperate enough to play any game with a Mount & Blade feel to it.

How about one filled with anime sex dolls dressed in lingerie and schoolgirl outfits, riding horses, operating catapults and tanks, and undertaking castle sieges? I'd usually pass on a game like this, but you know what? 2020 is only a few days old and we can already tell it's gonna be a messed-up-as-hell year. Rather than fight it, I'm just gonna lean into it. Bring on the weirdness.

Welcome to Girls' Civilization! "There is no man in this game" is listed as the first feature on its Steam page. When you start the game it immediately shows you a screenshot of instructions on how to fix a crashing glitch. The first character I meet is wearing Roman armor and a garter belt. Let's do this!

Girls Civilization is surprisingly story-heavy, and from what I can gather from multiple lengthy conversations with all the anime girls I meet (which are usually framed from behind and from a low camera angle so you can see up their skirts) you're a former military robot that's been reactivated in a factory by another military robot, and you're supposed to do... something. Gather allies, fight wars, research technology, run around in tiny skirts and heels, that sorta thing.

If you're familiar with Mount & Blade you'll pretty quickly grasp most of Girls' Civilization. You travel a low-res overworld while other factions roam around fighting among themselves. You can get into skirmishes with other armies, visit towns for supplies or to recruit (in this case, construct) additional sexy robot soldiers. You use an overhead RTS mode before a battle begins to direct your skimpily-dressed units, and engage in third-person combat during the fight itself. You never really die, you just become incapacitated and recover, trying to build up your skills and increase the size of your anime army.

And as in M&B, the most fun you can have is in a huge battle with dozens or hundreds of AI-controlled warriors. Even when those warriors are dressed in lingerie and swinging bats while they climb conveniently placed giant ramps into unrealistic castles, it's still fun.

Girls' Civilization begins in an medieval age, with all the sexy robots wondering why they're using swords and axes instead of more advanced weapons, but you can research new technology and progress into a gunpowder age with rifles, machine guns, and tanks.

I didn't get that far. I hunted down some bandits, found a new skirt that appeared to contain at least a little bit of armor, recruited some archers and cavalry from a town, then promptly lost a battle to a massive army of baseball bat-wielding sex dolls.

You can, naturally, customize your character and companions, including the type of panties and heels they wear. Do you like upskirt shots of anime military robots? There are plenty of those, too.

I can't say I really enjoyed my brief time with Girls' Civilization—big battles are fun but the menus are a mess, there are tons of glitches, it doesn't do a great job of explaining what's going on despite constantly stopping to explain what's going on, and I ended my session by falling through the map and getting wedged into some sort of underworld where I could only perform upper-body dance moves.

Ultimately, like most M&B clones this just feels like a Mount & Blade anime mod, not a standalone game you'd want to (as I did) spend almost $20 on.

On the plus side, it did what a Mount & Blade clone should do: it put me in the mood for some actual Mount & Blade, so I'll be playing some of that later this week. No, I won't be able to customize my soldiers' panties, but I think I can live with that.