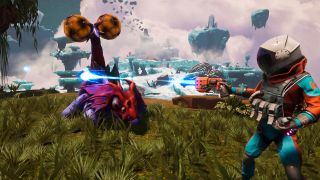 In 2017, Far Cry 4 director Alex Hutchison left Ubisoft to launch a new indie outfit called Typhoon Studios, which quickly went to work on a first-person adventure game called Journey to the Savage Planet. Today he returned to the warm embrace of corporate ownership, this time as part of Google's Stadia Games and Entertainment.

Typhoon is a relatively small studio, but its founders have significant development experience, which Stadia boss Jade Raymond told GamesIndustry is what made the studio attractive to Google.

"They've really assembled a triple-A team, and the goal of acquiring the team is that it will really give us a head start in making the system-defining games everyone is waiting for," Raymond said. "This is a top AAA team of industry veterans who already have a great working relationship and were able to ship something quickly, and they have a lot of great ideas for the platform."

Hutchison said he was happy to return to the corporate fold after a relatively short stint as an indie because Stadia will let Typhoon carry on as it always has—and being indie wasn't really central to the whole thing anyway.

"The reason we started Typhoon was to work with a particular set of really high quality people, to control the vision of the game we were making, and to make cool games, basically. Those three things will be preserved moving into Stadia," he said.

"We're bringing the same team with us—all 26 people are signed up to join Stadia. I've worked with and known Jade for almost 20 years now, and Reid [Typhoon co-founded Red Schneider] as well, and I'm very confident we can maintain that sense of independence as well as being great partners within the Stadia structure. Because Stadia wants us to make really great software to make the platform look good."

Journey to the Savage Planet is still scheduled for launch on January 28 on consoles and PC, but future releases will be exclusive to Stadia. It's available for pre-purchase on the Epic Games Store.