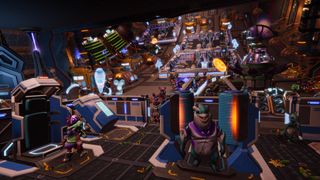 The moment I sat down in front of Spacebase Startopia, Realmforge Studios' new sci-fi management romp, I was in familiar territory. I knew someone would remake 2001’s Startopia if I waited for long enough, and while they’re not officially connected, the similarities run deep. There’s the name, obviously, and then pretty much everything else.

I’m always trying to throw Startopia in 'best of' lists and I would have absolutely signed a petition for a sequel—that’s as much as I’ll do for anything—so I’m all for it hewing to the original. I was still surprised by just how closely they resemble each other, though, with everything from the layout of the station to the types of buildings and services being replicated.

Spacebase Startopia puts you in charge of a rundown, disused space station, which you can try to transform into a huge interstellar hub brimming with aliens. The station is unlocked section by section and split into three decks, each with a different role. At the top, there’s a Bio Deck that can be terraformed to meet the needs of various alien visitors. Thirsty aliens can visit the Fun Deck below, where all the leisure services can be found. Then there’s the Sub Deck at the bottom, containing everything from recycling plants to hospitals.

Cute little robots scurry around the station, building rooms and cleaning up rubbish, but most of the jobs require fleshy aliens. Bugs are natural communicators, so you’ll want to stick them on in the communications array. Greys like to probe things, so they make excellent doctors, which you’ll need if you want to combat brainslug infestations and other cosmic illnesses. Employment at your spacebase comes with perks like a snazzy uniform and… that’s it.

While the alien species all have certain proclivities, all your visitors and employees are still individuals with their own skills, tastes and quirks. It’s not been implemented yet, but eventually they’ll share their thoughts via an interstellar Twitter, a bit like Cities: Skylines’ Chirper. Some have simple needs, happy enough to just hang out in the cat cafe, but others might want a night of drinking, dancing and debauchery. For the truly hopeless, there’s the lootbox lottery, which lets your visitors fritter their money away on the chance to get a fancy new hat, which they can proudly wear while wandering around the station.

There’s a lot of joy to be had in just watching your visitors use your rooms. When someone wants a wash, for instance, they have to go through what is essentially a car wash. It’s all very playful and silly and definitely wouldn’t pass a health and safety inspection on Earth. In the disco, you can spy on them showing off their killer moves, and you can get the DJ to change the tunes to suit the dancing aliens’ musical preferences.

While visitors to your station will spend money, to make the big bucks you’ll want to trade. There’s a trader for each alien species, and you can build up industries to supply them with goods. Even the relaxing Bio Deck can be used to make you rich, as you can sell everything you grow there, or the resources can be spent on stuff you can build for your station. On the Sub Deck, you can build a trading dock and watch as the ships float in.

There are subtle changes in the details, but returning station administrators should be able to jump in without missing a beat. There are a couple of places, however, where Realmforge thought Startopia was a bit lacking. Spacebase Startopia will have a more robust tutorial and tips system, and progression will be more defined, unlocking new rooms as you complete missions. The campaign is quite a bit larger, too, and will be accompanied by cooperative and competitive multiplayer and, of course, a sandbox mode.

Combat is probably the most notable new addition. Instead of indirect combat, fights in Spacebase Startopia are RTS affairs where you get direct control of mechs that you’ve constructed. You’ll need to show enemies and competitors the airlock, and opportunistic pirates will occasionally decide to invade. Realmforge’s Dungeons series, which started out as an homage to Dungeon Keeper, also features an RTS layer, and Spacebase Startopia should work similarly.

It’s a good thing that Startopia’s formula hasn’t really dated, so despite being a bit conservative, its spiritual successor doesn’t seem like a throwback. And more importantly, it just looks like a lot of fun to play. My tour was hands-off, unfortunately, but I was itching to grab the mouse. Like other games of the Bullfrog-era, or inspired by it, Spacebase Startopia has a toybox, tactile quality that makes you just want to click on things.

Spacebase Startopia is due out in 2020.