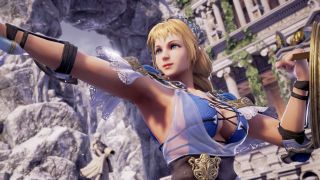 The Soulcalibur series has been around since the late ‘90s, but VI marks its first appearance on PC—and it’s long overdue. It’s a fairly traditional beat-’em-up in most respects, but with a focus on melee weapons and the ability to move in eight directions, rather than being stuck on a flat Street Fighter-style plane. So as well as blocking and parrying, you can side-step away from the beautifully-animated swings of your opponent’s sword, staff, axe, or claws. It’s also wonderfully melodramatic, like an absurd medieval soap opera where people settle their disputes by battering each other with deadly weapons.

The series is also famous for the wild variety of its characters. There’s katana-wielding samurai Mitsurugi, ghostly pirate lord Cervantes, whip-cracking warrior Ivy, and weird contortionist gimp Voldo, just to name a few. And they all feel distinct thanks to the quality of the series’ animation and the particular strengths and weaknesses of their weapons of choice. The final roster for VI hasn’t been confirmed yet, but Mitsurugi and nimble sword-and-shield fighter Sophitia were available in the early demo I played.

Longtime fans will be glad to know that Soulcalibur hasn’t changed much at all. If you’re familiar with the series, the controls will immediately feel comfortable. You can slash vertically and horizontally with your weapon, juggle your opponent in the air, change your stance, and chain dazzling, rapid-fire combos together. It’s classic Soulcalibur, and considering this will be many PC gamers’ introduction to the series, that’s a good thing. It wouldn’t be fair if our first taste of the game was some dramatic reinvention.

But, in saying that, there are some new additions to the traditional formula, including a system designed to give rookie players a chance against a more experienced fighter. Hold the Reversal Edge button and you’ll slowly charge up an attack that, if it lands successfully, grinds time to a halt and forces both players into a violent game of rock, paper, scissors. You have a few seconds to guess what the other player is about to do and react accordingly. The idea behind this system is giving a struggling player some breathing room, and a chance to come back from an overwhelming assault.

Charging a Reversal Edge leaves you briefly open to attack, however, so there’s still some risk involved in trying to trigger one. But if you manage to predict your opponent’s attack and respond correctly, they’ll be stunned briefly when you’re whisked back to regular combat, giving you an edge. It’s nice to see a beat-’em-up—one of the toughest genres for new players to get into and, more importantly, stick with—making some concessions for the more inexperienced among us. But the danger involved in pulling a successful Reversal Edge off also means that it won’t give them an unfair advantage either.

The demo I played was clearly a work in progress, with only two stages, two characters, and a basic duel mode to choose from. But even at this early stage it has that familiar, satisfying Soulcalibur combination of weighty combat and vibrant, flowing animation. The Critical Edge super moves are particularly entertaining to watch, including one where Sophitia knocks her opponent into the air, charges her sword up with lightning, then throws it, impaling them in the stomach. And as they fall back to the ground, crackling with electricity, she turns to the camera and poses for you, nonchalantly catching her sword. It’s completely over the top, yes, but brilliant because of it.

Making a fighting game deep for veterans as well as accessible for newbies is not an easy thing to pull off, but developer Project Soul is having a confident crack at it here. I’m also interested to see whether we get a PC-exclusive guest character. Previous games have featured Link from The Legend of Zelda, Ezio from Assassin’s Creed II, and even Darth Vader and Yoda. How about Gordon Freeman? He could use his crowbar as a weapon. It's perfect. Soulcalibur VI, which producer Motohiro Okubo considers a celebration of the series’ storied 20 year history, is due for release sometime next year, and I’m glad to see the tale of swords and souls finally being told on PC.