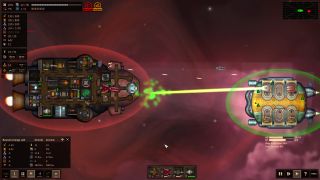 I don't think it's possible to look at a screenshot of Shortest Trip to Earth and not be reminded of FTL. Edvin Aedma, one of the developers of Shortest Trip to Earth, who previously worked on the excellent Teleglitch, explains to me that the idea for his spaceship roguelike game technically predates its release, even if it's since become an important influence. "I started designing it in 2010, which was two years before FTL. I even have email proof if you would like to see it!"

Aedma didn't have to offer, though. I'm not a copyright lawyer, after all, and I want to see someone else put a brilliant spin on Subset Games' space-based strategy game, because I don't think it's happened yet. In Shortest Trip to Earth, many familiar elements are retained: the story instances with multiple outcomes, ship-to-ship combat, sectors dominated by strange alien species and intense resource management. Its four creators have been working on it for five years, and it's complex and detailed in ways that hardcore FTL players will appreciate.

Your ship has just met an alien empire on a planet far from Earth. When this empire demanded you sacrifice a crew member's life in order to broker peace, you shot their emperor in the face and ran for it. Now Earth and this alien faction are at war. You're venturing through ten different levels to reach Earth, and each will be controlled by an alien species. There's a few different ships to choose from with different strengths, with more unlocked deeper into the game.

Most of the major bits of FTL are here, then, but there's extra detail in Shortest Trip to Earth that I really like. You can battle up to three ships at once, for example, which looks tough to manage. Each jump between planets costs not only fuel, but organics, meaning you have to be conscious of your crew's food needs. Outfitting your ship with a greenhouse should help with that, but if you want to consume less organics per jump, consider putting them in cryosleep so they need to eat less.

Your crew carries specific firearms to deal with ship invaders, and you can customise their loadouts. There's also around fifty weapons you can fit to your vessel. Every crew member, too, has a little Dwarf Fortress-y line of text explaining their backstory, and you can hover over a character to see what they're thinking. Every ship also has a cat.

It's the bits of story that make the universe surrounding the ship seem exciting. Aedma excitedly reels off a bunch of scenarios: in a reference to cult classic film Heavy Metal, a green rock will make your crew behave a little wildly, and only dumping that rock into the sun will fix that. You'll discover one planet with strange mushrooms, and if you bring them back to your ship, they'll release spores that grow into living humans. I'm shown an encounter with a pleasant-looking space creature called a warp whale, which you can either hunt for a precious resource, or leave it be. For every nice action you perform on your run, you'll accumulate 'fate points', which at the start on your next run through the game, you can spend on perks and items that'll make your life a bit easier.

Along with the increased number of potential enemies, the combat is a little different from FTL. The pace is similar, and you can pause while you make decisions, but you control the arc of your attacks rather than targeting a specific module or room. I only see one battle in action, and it's pretty brutal. The enemy sends their soldiers to board in a little shuttle (no one teleports in this universe), and I see them wipe out four or five of the crew in an intense top-down shootout.

I couldn't quite get a clear answer on whether intruders will murder the ship's cat, but I suppose if they blow up the vessel, that's basically the same thing. I hope the cat somehow still lives.

Feature creep is probably my biggest concern, here—after writing almost 600 words of notes on my phone in a 30 minute demo, I stop listing everything that's in the game, because some of it is super granular and a bit complicated. The interior of your ship and the hull need to be repaired separately when they're damaged, for example, and you might need to go to separate stations to get each part of the ship fixed up, which seems unnecessarily obtuse. Aedma explains that development has already wrestled with feature creep, and that what's in the game now basically amounts to the team's last wishlist.

I still wonder if the amount of numbers on screen and systems could be trimmed down a bit, but that's just based on my initial impressions of the demo. I also think it might benefit from an easy mode, like FTL's Advanced Edition did, for when you mostly want to enjoy the experience of travelling through space and the bits of story. Aedma says the original two difficulty settings the team had in mind were 'very hard' and 'hardest'. A bit of flexibility would be nice.

Still, I'm excited by the level of detail here. I like reading what the crew is dreaming about when they're in cryosleep, because the flavour text is fun. At Gamescom, the developer brought little printouts of the original art that brings the universe to life, and each one looks like a tiny fridge magnet of a piece of '70s sci-fi art.

FTL should be its own sub-genre, and while Shortest Trip to Earth doesn't look nearly as crisp or seem as easy to pick up, it's different enough that I want to sink a bunch of hours into exploring its many worlds.

It's out in Early Access later this year, with a full release in 2019.