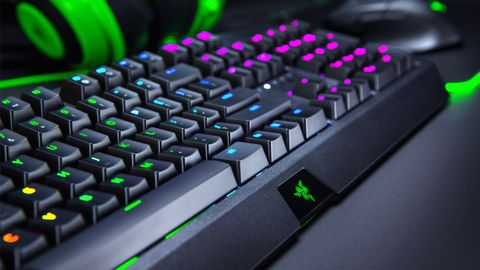 A wealth of macro options and superb Green switches make typing or gaming a pleasure, but potential software issues are an unwelcome bump in the road.

You know something’s good when it warrants a relaunch. That’s the case with Razer’s budget-friendly version of the BlackWidow mechanical keyboard; designed as part of the company’s value range, it feels like the middle of a venn diagram between the BlackWidow Tournament Edition and the BlackWidow Elite. It’s basically the F1 race-car of gaming keyboards—lacking frills, but supremely well-tuned.

So, what’s the difference between this and other BlackWidow decks? It’s basically a ‘greatest hits’ remix, offering the still-excellent Green mechanical switches for tactile clickiness, an absurd number of RGB color combinations (16.8 million, to be precise), fully programmable keys with on-the-fly macro recording, on-board memory and cloud storage, 1000Hz Ultrapolling, and the usual N-key rollover and anti-ghosting we’ve come to expect from Razer. In other words, the only things missing are passthroughs, dedicated media buttons, and the kitchen sink. For our money, it’s also more versatile than the cheaper Tournament Edition. Although there’s still no wrist-wrest, it goes one better than that model by including a numeric keypad along with its compact, matte-black shell. Essentially? It’s the perfect middle-ground in both features and cost (it’ll set you back £119.99).

While a lack of USB or audio passthrough is disappointing, this deck shares the same fantastic keys that made its predecessors special. Indeed, the Green mechanical switches have lost none of their charm; they’re tactile and clicky enough to make it seem as if you’re hammering away on a typewriter. In fact, they remain some of the most satisfying keys we’ve used in the office thanks to minimum wobble, negligible input lag, and a weighty, button-like ‘clack’ as you press down. The only downside? They’re noisy. Seriously, these keys aren’t subtle. You won’t have much reason to care if it stays at home, but this is a factor worth considering for those who’ll use the BlackWidow in an office/shared environment.

Still, one (subjective) complaint thus far isn’t bad going. In other news, it doesn’t take up much real-estate on your desk and the ability to program any key—and carry those bindings with you, no matter the computer—more than make up for a lack of dedicated macro keys like the ones you’d find on Corsair’s K95 Platinum. You have the ability to modify practically anything about your deck, too; this can be done through in-the-moment macros (via the FN and F9 keys) or Razer’s Synapse software. The latter provides granular control over ever last key, giving you the chance to tinker to your heart’s content.

Unfortunately, this high is tempered by odd but significant quirks. Certain keys occasionally ‘got stuck’ while I was using Gaming Mode, a system that’s supposed to increase the amount of key presses registered at once. For instance, I was occasionally left with a row of ‘h’s for no discernable reason. Glancing at Razer’s support page for another BlackWidow product, the Ultimate, suggests that this may be linked to Synapse; they suggest turning it off in an FAQ. That did the trick for me, but it’s an issue even so when part of the keyboard’s appeal lies in tinkering with bindings via this program.

Similarly, I encountered problems with keys not registering every now and then. Although it wasn’t a constant issue, it happened often enough to become frustrating. Gaming Mode couldn’t stop this ghosting problem, either. A missing ‘a’ here. A vanished ‘t’ there. A space that didn’t show up on command. N-key rollover is all good and well, but it doesn’t count for much when certain inputs are going on walkabout.

There might be a benign explanation, of course. Perhaps I wasn’t pressing hard enough. Maybe I just had a dodgy unit. It could even be linked to Razer Synapse, as was the case above (switching it off yielded much better results, and I didn’t encounter the issue before turning Synapse on). Yet this quirk is enough to cause concern nonetheless. I find it hard to praise the deck’s “built-in anti-ghosting” as a result, though I hope time will clear the matter up. If it’s a software issue—and there’s a lot of reason to believe it is—this should be quickly fixed.

It’d be a real shame if it wasn’t. You see, I didn’t have any such problems gaming. After using the BlackWidow with everything from Apex Legends to Elite: Dangerous, I couldn’t muster a single criticism with its performance in-game. Workmanlike and modest, it’s the sort of keyboard that gets the job done without shouting about it. I do wonder whether you’re better off saving the extra $40/£50 for a more kitted-out Elite, but this version will serve you admirably anyway.

Would I recommend it, then? Broadly speaking, yes. It’s a satisfying deck to use for gaming and typing, and those Green switches remain stellar. Form-factor and macro programming help as well, making this a damn versatile machine. All the same, infrequent problems with ghosting stop me short of a ringing endorsement—for now, that is.

A wealth of macro options and superb Green switches make typing or gaming a pleasure, but potential software issues are an unwelcome bump in the road.