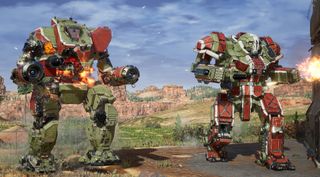 If you've been waiting for MechWarrior 5: Mercenaries to arrive, today's the day you can finally suit up and dole out some oversized destruction, like the good old days. Before you do, however, Nvidia has a new driver release that could help things along.

That's assuming you own a GeForce graphics card, of course. You also have to be willing to pounce on a new driver release before it's had time to aerate in the wild, to see if there are any problems. I haven't heard of any yet with Nvidia's new 441.66 WHQL driver package, though it's early. That said, this is considered a "Game Ready" driver release for MechWarrior 5.

"Game Ready drivers provide the best possible gaming experience for all major new releases. Prior to a new title launching, our driver team is working up until the last minute to ensure every performance tweak and bug fix is included for the best gameplay on day-1," Nvidia explains.

Jarred is busy testing the new driver and benchmarking MechWarrior 5, and should have some numbers to share soon. So far, performance appears largely unchanged relative to 441.20.

In addition to MechWarrior 5, the 441.66 release is also optimized for Detroit: Become Human (launches December 12). Nvidia added a couple of new G-Sync Compatible displays to the mix with this release as well. They include MSI's Mag251RX and ViewSonic's XG270. There are now over 60 G-Sync Compatible displays in all (you can see the full list here).

As for the usual round of bug fixes, here are the ones Nvidia managed to stomp out:

There are a few open issues to be aware of. In Windows 7, World of Warcraft: Battle for Azeroth (DirectX 12) is prone to crash when switching from DX11 to DX12. And in Windows 10, there are two known issues:

Nvidia says it's working with Rockstar Games to fix the crashing issue in GTA V, though there's no mention of when it might be resolve.

Follow this link to download the latest GeForce driver. Also be sure to check out our guide on how to update drivers for tips on best practices.