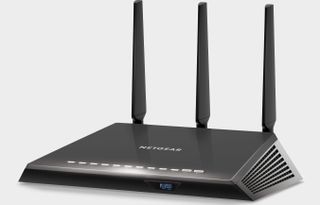 Upgrade to a speedy Wi-Fi 5 router for relatively cheap with this deal. (Image credit: Netgear)

If you need a new router, now is a good time to shop for one. Not only are holiday sales still lingering, but with the advent of Wi-Fi 6 (802.11ax), vendors are looking to make room for newly minted models by marking down Wi-Fi 5 (802.11ac) inventory. That appears to be the case here, with Walmart discounting Netgear's Nighthawk AC2100 (R7200-100NAS) to $89.

That's a penny shy of $91 below its list price. Throughout the first half of November, Amazon sold this same model for around $180, and even though it's since dropped in price (it's currently listed for $120.99), you're coming out ahead with this deal.

Don't be afraid to buy a Wi-Fi 5 model either, especially at this price. Sure, newer Wi-Fi 6 models offer some nice enhancements over Wi-Fi 5, and there are reasons why gamers should care about Wi-Fi 6. The biggest one is better handling of multiple devices on a network. However, to utilize a Wi-Fi 6 router to its full potential, your devices and wireless adapters need to support Wi-Fi 6 as well, and most existing ones do not. It's kind of USB Type-C in that it's a better connector than USB Type-A, but will take some time to become the de facto standard.

Meanwhile, Wi-Fi 5 hardware is fairly ubiquitous. In my testing, Netgear's Nighthawk models have been among the best gaming routers, with fast speeds and strong wireless signals. They can also be pricey, which is why this deal is so attractive.

From a technical perspective, this is a dual-band model supporting speeds of up to 800Mbps on the 2.4GHz channel and 1,300Mbps on the 5GHz channel. It also features a built-in 4-port switch (pretty standard) for wired connections, a USB 3.0 port to hook up an external storage device or printer (for sharing either one over your network), and range that is suitable for "large homes" with three amplifiers and external antennas.