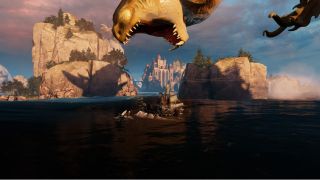 Remember Maelstrom, the last-ship-standing game of naval combat that entered Early Access last year? The one where you can be captain of an orc ship pulled by giant sharks, and the shrinking battle-royale circle is a section of Dead Water hiding a colossal sea monster that will just straight-up eat you?

Back when it cost $20, our own Christopher Livingston said, "The toughest part of Maelstrom, from what I've played, has been getting a full match." When you could get a match it was pretty fun swinging around whirlpools launching broadsides at your enemies, and going free-to-play will presumably give player numbers a bump.

"All gameplay and progress can be unlocked by playing the game for free", say developers Gunpowder Games. "No additional purchases are needed to enjoy the game to its fullest extent. There are no ways to purchase a competitive advantage in game."

You can however buy boosts to accelerate progression, and of course there's a variety of cosmetics and a battle pass in the store. "There are no loot boxes", they add. "All Items are directly purchasable in the store."

Those who bought the game during Early Access receive a bunch of freebies, including all ships, the seasonal battle pass, 10,000 gunpowder (that's the premium currency), and a bunch of mates and exclusive stuff.

There's a roadmap too, which notes that an undead fleet and a duel mode are on the way. Maelstrom's available on Steam.