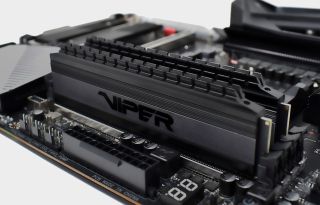 DDR4 memory hasn't been around very long, at least on consumer-level hardware—Intel switched to it with the sixth-generation Core CPUs (Skylake), and AMD adopted DDR4 with the release of the first Ryzen processors. Now we have DDR5 to look forward to, as Micron has announced it has started sending samples of the high-tech RAM to its hardware partners.

Micron promises that DDR5 will deliver "more than an 85% increase in memory performance," while also doubling memory density. We're still very far off from mass production of DDR5 RAM, much less the technology trickling down to gaming PCs (Intel reportedly won't implement support until Sapphire Rapids in 2021), but it's exciting to hear what's on the horizon.

Some of the advertised advantages of DDR5 include doubled data rates (from 1600-3200 MT/s to 3200-6400 MT/s), lower power requirements, DQS interval oscillators to better protect against shifts in voltage and temperature, and on-die ECC memory.

Micron hopes to ship DDR5 modules for sever systems in the second half of 2020. You can find more technical information on Micron's website.