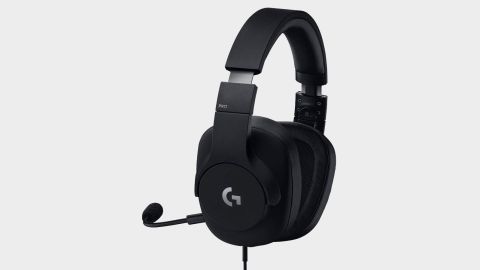 Understated, sensibly designed and sleek in its appearance. Lacking a bit of low-end power, though.

What exactly do professional esports players need from one of the best gaming headsets? According to Logitech’s marketing hype: this. The G Pro is designed and constructed as part of a collaboration with pro gamers, and the result is a stripped-down $90 model with no RGB lighting or other gimmicks. Just a plain black wired headset with a detachable mic and inline controls for volume and mic mute. That’s it. Think of it like Gregg Popovich’s San Antonio Spurs, focusing ruthlessly on the fundamentals and throwing out all the showboating.

That’s not to say the G Pro sacrifices any visual appeal for its simplicity. I much prefer the stealthy all-black design, broken only by the white Logitech logos on the earcups, to showier designs companies like Asus and Astro often opt for. At the top of the headband is a glossy ‘G’ logo, and there’s a discrete ‘Pro’ at the side. Except for that, it’s all smooth black curves and reassuringly sturdy construction materials. The headband itself isn’t padded with much memory foam, but this is a super-light headset at 9.14 oz (259 g) so more padding isn’t really required.

The ear pads come in two flavors: leatherette fitted out of the box, and an additional pair of microsuede pads. The leatherette isolates against external noise well, which is why it’s used on so many other gaming headsets (shout out to Kingston’s HyperX cans) and given the unusually large square earcup design on the G Pro, it feels like a must here. The microsuede option is more breathable, but to be frank they look like they were left in someone’s pockets and accidentally put through the laundry. When they’re fitted to the headset they totally break up the G Pro’s sleek, stealthy look like a pair of ‘black’ socks you’ve washed 300 times showing up for the off-grey they are against your black suit. Unless you have a rare condition that involves an unusual number of sweat glands on your ears, stick to the leatherette.

That brings us onto the overall comfort levels: they’re good. Not the best I’ve ever tested: the HyperX Cloud Alpha seems moulded to my exact cranial dimensions and simply can’t be beaten. But the G Pro’s slightly looser fit and more lightweight design makes for a different kind of comfort, less like being held in a warm embrace by your headset and more like forgetting you’re wearing it. Seriously, nine ounces. That’s incredibly lightweight, and it really makes a difference after the first hour you wear it. Those esports people are obviously no strangers to the line of agony that depresses into the top of your head during longer sessions with hefty headsets, and they steered Logitech to an effective solution to it.

In terms of controls there are just two—a volume scroller and a mic mute switch on the braided mini-jack cable. Perhaps in the interest of keeping the weight down, this inline control feels a little flimsy, but it does the job. I do miss having a physical chat mix control on every headset that isn’t a Steelseries Arctis now since I’ve become so used to that little convenience, and you’d imagine pro gamers would value that especially.

Special praise must be reserved for the microphone, which is among the best electret headset mic models in production. Not only does it filter out background noise effectively and articulate your voice with clarity, it also does a wonderful job at reproducing your voice’s lower end qualities, to a degree that’s frankly bizarre for such a tiny and unassuming detachable mic. This is well into streaming quality territory, and it stays put once you bend it into position.

The G Pro scores well on most of the basics, but those pieces don't matter much if you don't have great audio, and sadly that seems to elude the G Pro. Its 40mm drivers are clear and precise, but they seem down on power and bass articulation compared with our absolute favourites from HyperX and Steelseries. Perhaps this toppy sound is a must-have among pro players that the rest of us simply can’t see the practicality of because we don’t game at that level. Even if that were the case, it still means the G Pro isn’t well suited to use on the go as a smartphone music companion, or for watching movies on the plane. It's not a headset I'd use for audio outside gaming.

I’ve heard anecdotal accounts of people greatly improving the sound quality by running the G Pros through a preamp, but at a 32 Ohm impedance it’s not immediately clear why that would be the case. That figure tells you it’s intended to run unpowered, but what the heck—if you already have a preamp as part of your setup, it’s worth experimenting.

Despite lacking a little oomph for music and movies, gaming is, predictably, where the G Pros sound best. Voicing countless audio cues at once within a broad sound stage—this is its bread and butter, and it handles the task at hand capably enough that the overall package is still well worth considering. Particularly at $90, where aesthetics as sleek and considered as this are a serious rarity.

Understated, sensibly designed and sleek in its appearance. Lacking a bit of low-end power, though.