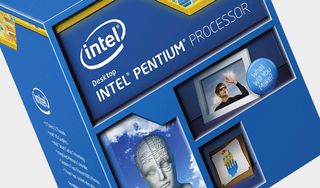 Strange things are happening in Santa Clara, where Intel is headquartered. While we're all waiting for the chipmaker to launch a series of desktop processors based on its 10-nanometer manufacturing, as it's already done for laptops (Ice Lake), we're getting a six-year old CPU to tide us over.

For some odd reason, Intel is resurrecting the Pentium G3420 based on its once formidable (but now old) 22nm Haswell architecture. Intel had previously discontinued this part, but is now pulling it out of the grave and plopping it on its roadmap.

"Cancelling this Product Discontinuance completely per new roadmap decision and enabling the product long term once again," Intel states in a Product Change Notification (PCN) document that was updated yesterday.

Our friends at Tom's Hardware surmise this is related to Intel's ongoing struggle to supply enough 14nm processors to meet demand. Around two weeks ago, Intel publicly apologized to customers for the shortage, saying it has "not yet resolved this challenge." There may also be a niche demand for kiosks or some other market where an old low-end Pentium chip is still sufficient.

"I’d like to acknowledge and sincerely apologize for the impact recent PC CPU shipment delays are having on your business and to thank you for your continued partnership," Michelle Johnston Holthaus, executive vice president and general manager of sales, marketing, and communications at Intel, wrote in an open letter.

At the time, it felt a bit like Intel was bragging about how many CPUs it was selling despite AMD's recent advances. But given this move, maybe it wasn't.

The Pentium G3420 is a lightweight processor—it's a dual-core CPU without Hyper Threading support (so 2 cores and 2 threads), clocked at 3.2GHz. We wouldn't recommend building a gaming PC around one, even a budget build. Instead, check out our list of the best CPUs for gaming if you're looking for options.