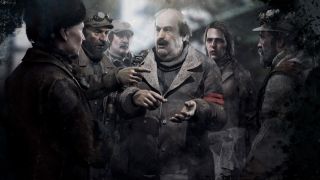 There are a lot ways for your citizens to die in survival sim Frostpunk: The Last Autumn, the follow-up to one of 2018's best games. They can die of starvation. Sickness. Accidents. Brawls. Exposure to unsafe working conditions. But even if none of those happen I just may murder them all myself. I hate my citizens that much.

Don't get me wrong: I love my little Frostpunk citizens, too. I want them to survive. Each of their deaths breaks my heart a little. But I hate them. It's a more palpable hate than I've experienced for tiny AI-controlled people in pretty much any other game I've ever played. Here I am, nobly trying to protect them from the incredibly harsh conditions I'm forcing them to endure, and what do they do? Betray me. Again and again. We'll be busy building the massive generator that will warm us against the encroaching, inevitable frost, and then some of them will notice a bunch of owls flying around during the daytime and assume they're harbingers of doom, and everything will grind to a halt.

The game text places the blame on the owls. Not me. I blame my citizens.

And my people aren't entirely wrong: those owls most certainly are an omen, an omen of just how badly human-made climate change will fuck with nature. But half of these idiots don't even believe that climate change is really happening, and they take the daytime owls not as a sign to work faster to build the generator, but as sign that nature is warning them to give up the construction project and go home. That's like deciding rain isn't a reason to patch the hole in your roof but a reason to give up on the idea of a roof altogether.

I hate my citizens so much. I want to save them, but boy do I hate them.

And saving them is not fucking easy. Frostpunk: The Last Autumn seems like it should be easier. Out today, it's a prequel to Frostpunk and takes place before the complete freezing of the world, so there's still green grass at the construction site. The outside world is still functioning: boats deliver material supplies, and after building a telegraph tower you can send for additional workers instead of relying on children for labor or accepting a bunch of refugees who are at death's door, as in Frostpunk's base game.

But while that sounds more pleasant, there really is no hope because I've seen the future of Frostpunk and I know those oceans will freeze solid and those lovely steampunk ships will stop arriving and children will someday be sent crawling around inside machinery by some awful, callous city leader (me). I know the world is doomed. Which is why I'm working these poor people (the ones I hate) so viciously to finish building the generator. It's the only chance we've got to live long enough to see the horrible, hopeless future.

As in the original Frostpunk, in The Last Autumn I pretty quickly slide into fascism. But can you blame me? An erotic photo mailed to a worker leads to chaos as people fight over it, repeatedly, and letters bearing bad news from home threaten to sink the motivation of the workers. I'm trying to protect them from themselves and preserve order, and the best way to do that, in my opinion, is to decide for them what they need to know and what they don't. Go ahead and judge me, but these are people who want to abandon the project because a few birds flew over it. The less they know, the better.

The guilt of censoring mail, of making people work long hours, of knowing that if there were any children available to me I would put them to work on dangerous machinery, it weighs heavily on me. Which is why I'm genuinely pleased when the labor portion of the book of laws opens up. Yes! Labor laws. This is exactly what I need.

That's not sarcasm, in case you were wondering. I really do need this. I can't be trusted not to use and abuse my citizens until they're corpses, especially with fresh workers arriving at the docks every few days. There needs to be a check in place against my horrifying, heroically brutal leadership.

I pass a law that there must be a labor union and a worker's council. It's risky—now the same idiots who take their cues from owls will now have a say in how the construction of the generator proceeds. I build them a labor hall (well, to be fair, I make them build themselves a labor hall, but unlike their cramped tents, crowded medical facility, and the understaffed pub it might actually be a place they enjoy spending time), and institute collective bargaining, which means they can negotiate in the event of a strike. We've had two strikes already, so it's doesn't take an oracle to divine there will be a third.

Setting up labor laws feels good to me, a feeling I don't often get while playing Frostpunk. And I won't lie, it feels good not just because the union will counter my worst impulses, but also because when things go wrong and we all die I'll be able to spread the blame around a little bit. Turns out, though, we don't even get that far. The first act of the labor union is to fire me.

They stick me in a rowboat and send me out to sea, and I can't say I blame them. I've broken several promises already, being late to build a chapel and bath houses and get everyone fed properly like I said I would. Not to mention all the mail censoring I've done. At least I can die at sea knowing I did what I could to give my workers a voice, even if that voice told me, loudly and in unison, to piss off.

Frostpunk: The Last Autumn is out today for $17. It requires the base game, which is currently on sale for $12.