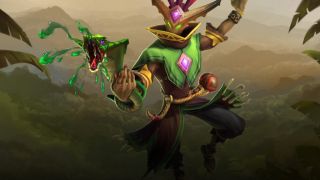 Hi-Rez Studios has announced that it is establishing three new, separate developers.

The company, known for its free-to-play multiplayer games such as Paladins and Smite, is dividing its resources into a trio of new studios that will be overseen by a general manager.

The three new studios are Titan Forge Games, Evil Mojo Games, and Heroic Leap Games. Each of these will be responsible for handling one of the company’s ongoing projects. Titan Forge Games will man the helm of Hi-Rez' MOBA Smite. Evil Mojo games will oversee the Overwatch-like shooter Paladins, while Heroic Leap games will develop Realm Royale, its Battle Royale spinoff originally known as Paladins: Battlegrounds.

Chris Larson, formerly the executive producer of Smite and Paladins, will act as general manager for first party studios, overseeing the three teams.

“The establishment of Titan Forge, Heroic Leap and Evil Mojo as standalone studios enables each of our development teams to fulfill their maximum potential and stay hyper focused on serving their individual player communities," Larson said. “Our games are built to provide near constant updates over many years. By giving each major game its own dedicated studio and identity, we empower them to control their own destiny and focus exclusively on their player communities.”

Hi-Rez’s support for Paladins, Smite, and Realm Royale has been pretty consistent. “By structuring ourselves in this manner, we allow the organization to scale to multiple games more easily, while ensuring our existing game communities receive a better, more focused service than ever before."