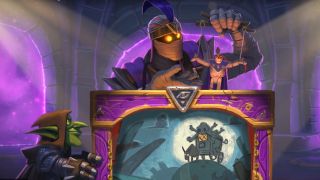 The first chapter of Galakrond's Awakening, the new solo adventure in in the Year of the Dragon-concluding Hearthstone: Descent of Dragons, is now live. The adventure features two separate story campaigns, one for the League of Explorers and the other for the League of E.V.I.L., and the first chapter of the E.V.I.L. campaign, with four card rewards to earn, is free for all players.

The adventure begins with the League of E.V.I.L. in Northrend, where Rafaam intends to complete his plan of arch-villainy by resurrecting the proto-dragon Galakrond. Taking control of nefarious characters including Kriziki and Madame Lazul, players must battle through three encounters to complete the chapter, including a showdown with Sir Finley. Here's what you'll get for getting the job done:

Chapter one of the League of Explorers campaign, and both sides of all subsequent chapters, can be purchased for $7 or 700 gold, or you can snap the whole thing up for $20. A total of 35 cards will be added to Hearthstone during the course of the campaign, along with two unique card backs for players who complete the campaigns on Heroic Mode. To get a good start on the action, don't miss our guide to conquering the first chapter of Galakrond's Awakening—for good and evil.