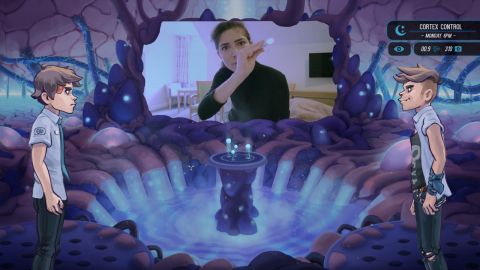 A high-minded effort and decent story undermined by bugs and mindless management mechanics.

Headspun casts you as the boss of Cortex, a company headquartered inside the mind of Theo, a man emerging from a five-week coma following a car accident. Theo’s memories are scattered all over his subconscious, most of Cortex’s employees are dead, and it’s up to you, Cortex CEO Ted, to get his brain back in order. This manifests as a side-scrolling management game in which you rebuild the company, interposed with live-action video of Theo’s convalescence in hospital.

It’s a fine premise, even if the fashionably synthy soundtrack, 80s fuchsia-tinted art style, and character design that seems to be inspired by 2D of Gorillaz fame didn’t really gel for me. It feels mostly like a flat aesthetic homage to an overused style, although the background art which blends blood vessels, capillaries and other internal brainy bits with the corporate office aesthetic has some nice touches.

Your avatar Ted symbolises the dour and often outright dickish side of Theo’s psyche. Ted wakes up from his own five-week coma to find Cortex in ruins following the accident, albeit kept in some loose semblance of order by his Cortex business partner Teddy, who represents the creative and romantic side of Theo’s personality. The game progresses in 24-hour days, with time passing whenever you engage Theo in mini-games.

Your interactions with the live-action part of the game are through Cortex Control, the main room in Cortex where a screen (with a totally unnecessary blinking animation) shows you what’s happening in Theo’s hospital room each day. Beyond the neurologist, who sticks to her role of nursing Theo back to health, the only significant character you interact with is Jack, Theo’s estranged best friend who believes that the two of them have a chance of publishing their own comic series.

It’s a reasonably engaging story, as you cross-reference the things you’re told in the live-action snippets with the information you piece together in Cortex’s Memory Bank. Information surfaces about Theo’s journey from aspiring comic book artist to wanker banker, as well as details that make you doubt the veracity of Jack and Teddy’s words. There’s a nice escalation of mystery here, even if the big twist ultimately feels predictable and earnest (exacerbated by the rather stagey acting).

From Cortex Control, you also assign workers to sidequests, which usually involve rebuilding rooms in Cortex, researching new activities for Theo, or cleaning up various parts of the building. It’s simple delegation stuff, made somewhat more complex by the fact that many of these assignments were buggy or outright broken at the time of writing this review. Nevertheless, there’s a simple catharsis in seeing the ruined cerebral space slowly come back to life.

The live-action snippets are few and far between, meaning that you spend most of the game playing mini-games that build up Neuro-Credits, which you use to hire staff, buy items that grant bonuses to Theo’s recovery, and rebuild rooms around Cortex. The mini-games—basic arithmetic, crosswords, timing challenges, and other forgettables—are repetitive and mundane, and while this is perhaps a fair reflection of the actual tedium of sitting in a room for weeks or months recovering from brain injury, Headspun just doesn’t strike the balance between interactive engagement and verisimilitude.

I also found these minigames far too easy to exploit. I amassed an absurd amount of Neuro-Credits due to plucky investments, and had far more than I knew what to do with by the time Theo’s story had come to an end.

The problem with the management aspect of the game is that by the time you’ve even built half the rooms, you’ll probably have completed the bite-sized story, and there’s really no reason to keep fixing Cortex up other than for the sake of mindless completionism. With no stakes, no multiple endings, no risk of making the wrong decisions or of going broke, and without the story to incentivise you, it really puts into perspective how much of the management side of the game is mere filler.

Headspun is a well-meaning attempt at exploring a fascinating topic. Wandering around certain rooms like the Dream Theater and Memory Bank, you see some some vivid imagery, and are faced with interesting questions about the relationship between memories and identity.

But it never delves deeper, restricting you to tedious minigames and superfluous base-building while you wait to see how story pans out. Headspun failed to entrench itself in my memory, and I wouldn't feel differently even if its swarms of bugs were squashed.

A high-minded effort and decent story undermined by bugs and mindless management mechanics.